Breast cancer is a disease in which certain cells in the breast become abnormal and multiply uncontrollably to form a tumor. Although breast cancer is much more common in women, this form of cancer can also develop in men. In both women and men, the most common form of breast cancer begins in cells lining the milk ducts

(ductal cancer). In women, cancer can also develop in the glands that produce milk (lobular cancer

have little or no lobular tissue, so lobular cancer in men is very rare.

In its early stages, breast cancer usually does not cause pain and may exhibit no noticeable symptoms. As the cancer progresses, signs and symptoms can include a lump or thickening in or near the breast; a change in the size or shape of the breast; nipple discharge, tenderness, or retraction (turning inward); and skin irritation, dimpling, redness, or scaliness. However, these changes can occur as part of many different conditions. Having one or more of these symptoms does not mean that a person definitely has breast cancer.

In some cases, cancerous cells can invade surrounding breast tissue. In these cases, the condition is known as invasive breast cancer. Sometimes, tumors spread to other parts of the body. If breast cancer spreads, cancerous cells most often appear in the bones, liver, lungs, or brain. Tumors that begin at one site and then spread to other areas of the body are called metastatic cancers

A small percentage of all breast cancers cluster in families. These cancers are described as hereditary and are associated with inherited gene mutations. Hereditary breast cancers tend to develop earlier in life than noninherited (sporadic) cases, and new (primary) tumors are more likely to develop in both breasts.

Particular gene mutations associated with breast cancer are more common among certain geographic or ethnic groups, such as people of Ashkenazi (central or eastern European) Jewish heritage and people of Norwegian, Icelandic, or Dutch ancestry.

. In most cases of breast cancer, these genetic changes are acquired during a person's lifetime and are present only in certain cells in the breast. These changes, which are called somatic mutations, are not inherited. Somatic mutations in many different genes have been found in breast cancer cells. Less commonly, gene mutations present in essentially all of the body's cells increase the risk of developing breast cancer. These genetic changes, which are classified as germline mutations, are usually inherited from a parent. In people with germline mutations, changes in other genes, together with environmental and lifestyle factors, also influence whether a person will develop breast cancer.

Some breast cancers that cluster in families are associated with inherited mutations in particular genes, such as BRCA1 or BRCA2. These genes are described as "high penetrance" because they are associated with a high risk of developing breast cancer and ovarian cancer and a moderate risk of developing pancreatic cancer and a type of skin cancer called melanoma in women who have mutations. Men with mutations in these genes also have an increased risk of developing several forms of cancer, including breast cancer, pancreatic cancer, prostate cancer, and melanoma. The proteins produced from the BRCA1 and BRCA2 genes are involved in fixing damaged DNA, which helps to maintain the stability of a cell's genetic information. They are described as tumor suppressors because they help keep cells from growing and dividing too fast or in an uncontrolled way. Mutations in these genes impair DNA repair, allowing potentially damaging mutations to persist in DNA. As these defects accumulate, they can trigger cells to grow and divide without control or order to form a tumor.

Mutations in dozens of other genes have been studied as possible risk factors for breast cancer. These genes are described as "low penetrance" or "moderate penetrance" because changes in each of these genes appear to make only a small or moderate contribution to overall breast cancer risk. Some of these genes provide instructions for making proteins that interact with the proteins produced from the BRCA1 or BRCA2 genes. Others act through different pathways. Researchers suspect that the combined influence of variations in these genes may significantly impact a person's risk of developing breast cancer.

In many families, the genetic changes associated with hereditary breast cancer are unknown. Identifying additional genetic risk factors for breast cancer is an active area of medical research.

Researchers have identified many personal and environmental factors that contribute to a person's risk of developing breast cancer. These factors include sex, age, ethnic background, a history of previous breast cancer, certain changes in breast tissue, and hormonal and reproductive factors. A history of breast cancer in closely related family members is also an important risk factor, particularly if the cancer occurred in early adulthood. In addition, exposure to cancer-causing compounds (carcinogens) can increase the rate at which somatic mutations occur, contributing to a person's risk of developing breast cancer.

Learn more about the genes associated with Breast cancer

Most cases of breast cancer are not caused by inherited genetic factors. These cancers are associated with somatic mutations in breast cells that are acquired during a person's lifetime, and they do not cluster in families.

In hereditary breast cancer, the way that cancer risk is inherited depends on the gene involved. For example, mutations in the BRCA1 and BRCA2 genes are inherited in an autosomal dominant pattern

, which means one copy of the altered gene in each cell is sufficient to increase a person's chance of developing cancer. Although breast cancer is more common in women than in men, the mutated gene can be inherited from either the mother or the father.

In the other syndromes discussed above, the gene mutations that increase cancer risk also have an autosomal dominant pattern of inheritance. It is important to note that people inherit an increased likelihood of developing cancer, not the disease itself. Not all people who inherit mutations in these genes will ultimately develop cancer.

In many cases of breast cancer that clusters in families, the genetic basis for the disease and the mechanism of inheritance are unclear. 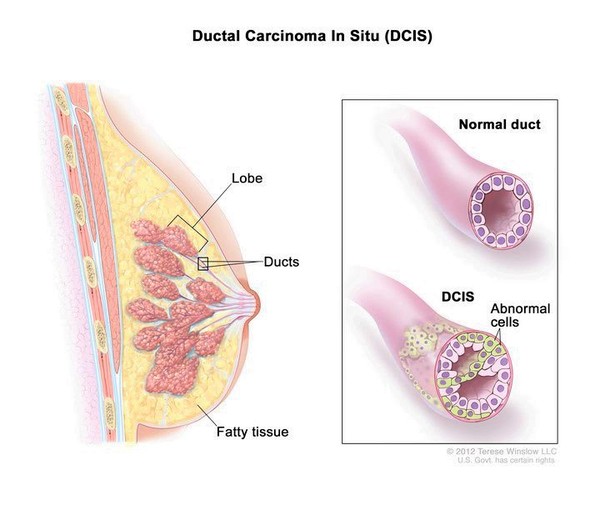