Ovarian cancer is a disease that affects women. In this form of cancer, certain cells in the ovary become abnormal and multiply uncontrollably to form a tumor

. The ovaries are the female reproductive organs in which egg cells are produced. In about 90 percent of cases, ovarian cancer occurs after age 40, and most cases occur after age 60.

Cancer can also begin in epithelial cells that form the lining of the abdomen (the peritoneum). This form of cancer, called primary peritoneal cancer, resembles epithelial ovarian cancer in its origin, symptoms, progression, and treatment. Primary peritoneal cancer often spreads to the ovaries. It can also occur even if the ovaries have been removed. Because cancers that begin in the ovaries, fallopian tubes, and peritoneum are so similar and spread easily from one of these structures to the others, they are often difficult to distinguish. These cancers are so closely related that they are generally considered collectively by experts.

In about 10 percent of cases, ovarian cancer develops not in epithelial cells but in germ cells, which are precursors to egg cells, or in hormone-producing ovarian cells called granulosa cells.

In its early stages, ovarian cancer usually does not cause noticeable symptoms. As the cancer progresses, signs and symptoms can include pain or a feeling of heaviness in the pelvis or lower abdomen, bloating, feeling full quickly when eating, back pain, vaginal bleeding between menstrual periods or after menopause, or changes in urinary or bowel habits. However, these changes can occur as part of many different conditions. Having one or more of these symptoms does not mean that a woman has ovarian cancer.

Some ovarian cancers cluster in families. These cancers are described as hereditary and are associated with inherited gene mutations. Hereditary ovarian cancers tend to develop earlier in life than non-inherited (sporadic) cases.

Because it is often diagnosed at a late stage, ovarian cancer can be difficult to treat; it leads to the deaths of about 14,000 women annually in the United States, more than any other gynecological cancer. However, when it is diagnosed and treated early, the 5-year survival rate is high.

Cancers occur when a buildup of mutations in critical genes—those that control cell growth and division or repair damaged DNA—allow cells to grow and divide uncontrollably to form a tumor. Most cases of ovarian cancer are sporadic; in these cases the associated genetic changes are acquired during a person's lifetime and are present only in certain cells in the ovary. These changes, which are called somatic mutations, are not inherited. Somatic mutations in the TP53 gene occur in almost half of all ovarian cancers. The protein produced from this gene is described as a tumor suppressor because it helps keep cells from growing and dividing too fast or in an uncontrolled way. Most of these mutations change single protein building blocks (amino acids) in the p53 protein, which reduces or eliminates the protein's tumor suppressor function. Because the altered protein is less able to regulate cell growth and division, a cancerous tumor may develop. Somatic mutations in many other genes have also been found in ovarian cancer cells.

A significantly increased risk of ovarian cancer is also a feature of certain rare genetic syndromes, including a disorder called Lynch syndrome. Lynch syndrome is most often associated with mutations in the MLH1 or MSH2 gene and accounts for between 10 and 15 percent of hereditary ovarian cancers. Other rare genetic syndromes may also be associated with an increased risk of ovarian cancer. The proteins produced from the genes associated with these syndromes act as tumor suppressors. Mutations in any of these genes can allow cells to grow and divide unchecked, leading to the development of a cancerous tumor. Like BRCA1 and BRCA2, these genes are considered "high penetrance" because mutations greatly increase a person's chance of developing cancer. In addition to ovarian cancer, mutations in these genes increase the risk of several other types of cancer in both men and women.

Germline mutations in dozens of other genes have been studied as possible risk factors for ovarian cancer. These genes are described as "low penetrance" or "moderate penetrance" because changes in each of these genes appear to make only a small or moderate contribution to overall ovarian cancer risk. Some of these genes provide instructions for making proteins that interact with the proteins produced from the BRCA1 or BRCA2 genes. Others act through different pathways. Researchers suspect that the combined influence of variations in these genes may significantly impact a person's risk of developing ovarian cancer.

In many families, the genetic changes associated with hereditary ovarian cancer are unknown. Identifying additional genetic risk factors for ovarian cancer is an active area of medical research.

In addition to genetic changes, researchers have identified many personal and environmental factors that contribute to a woman's risk of developing ovarian cancer. These factors include age, ethnic background, and hormonal and reproductive factors. A history of ovarian cancer in closely related family members is also an important risk factor, particularly if the cancer occurred in early adulthood.

Learn more about the genes associated with Ovarian cancer

Most cases of ovarian cancer are not caused by inherited genetic factors. These cancers are associated with somatic mutations that are acquired during a person's lifetime, and they do not cluster in families.

, which means one copy of the altered gene in each cell is sufficient to increase a person's chance of developing cancer. Although ovarian cancer occurs only in women, the mutated gene can be inherited from either the mother or the father. It is important to note that people inherit an increased likelihood of developing cancer, not the disease itself. Not all people who inherit mutations in these genes will ultimately develop cancer.

In many cases of ovarian cancer that clusters in families, the genetic basis for the disease and the mechanism of inheritance are unclear. 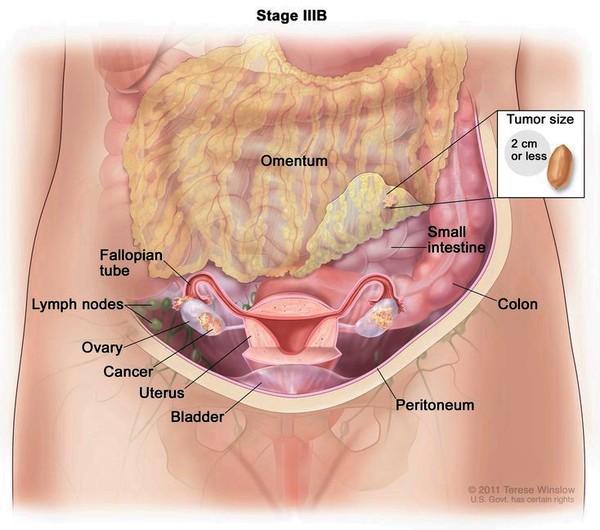