Prostate cancer is a common disease that affects men, usually in middle age or later. In this disorder, certain cells in the prostate become abnormal, multiply without control or order, and form a tumor. The prostate is a gland that surrounds the male urethra and helps produce semen, the fluid that carries sperm.

Early prostate cancer usually does not cause pain, and most affected men exhibit no noticeable symptoms. Men are often diagnosed as the result of health screenings, such as a blood test for a substance called prostate specific antigen (PSA) or a medical exam called a digital rectal exam (DRE). As the tumor

grows larger, signs and symptoms can include difficulty starting or stopping the flow of urine, a feeling of not being able to empty the bladder completely, blood in the urine or semen, or pain with ejaculation. However, these changes can also occur with many other genitourinary conditions. Having one or more of these symptoms does not necessarily mean that a man has prostate cancer.

The severity and outcome of prostate cancer varies widely. Early-stage prostate cancer can usually be treated successfully, and some older men have prostate tumors that grow so slowly that they may never cause health problems during their lifetime, even without treatment. In other men, however, the cancer is much more aggressive; in these cases, prostate cancer can be life-threatening.

. The signs and symptoms of metastatic cancer depend on where the disease has spread. If prostate cancer spreads, cancerous cells most often appear in the lymph nodes, bones, lungs, liver, or brain.

Cancers occur when genetic variants (also known as mutations) build up in critical genes, specifically those that control cell growth and division or the repair of damaged DNA. These changes allow cells to grow and divide uncontrollably to form a tumor

The proteins produced from the BRCA1 and BRCA2 genes are involved in fixing damaged DNA, which helps to maintain the stability of a cell's genetic information. For this reason, the BRCA1 and BRCA2 proteins are considered to be tumor suppressors, which means that they help keep cells from growing and dividing too fast or in an uncontrolled way. Variants in these genes impair the cell's ability to fix damaged DNA, allowing potentially damaging variants to persist. As these defects accumulate, they can trigger cells to grow and divide uncontrollably and form a tumor.

The HOXB13 gene provides instructions for producing a protein that attaches (binds) to specific regions of DNA and regulates the activity of other genes. On the basis of this role, the protein produced from the HOXB13 gene is called a transcription factor. Like BRCA1 and BRCA2, the HOXB13 protein is thought to act as a tumor suppressor. HOXB13 gene variants may result in impairment of the protein's tumor suppressor function, resulting in the uncontrolled cell growth and division that can lead to prostate cancer.

Inherited variations in dozens of other genes have been studied as possible risk factors for prostate cancer. Some of these genes provide instructions for making proteins that interact with the proteins produced from the BRCA1, BRCA2, or HOXB13 genes. Others act as tumor suppressors through different pathways. Changes in these genes probably make only a small contribution to overall prostate cancer risk. However, researchers suspect that the combined influence of variations in many of these genes may significantly impact a person's risk of developing this form of cancer.

In many families, the genetic changes associated with hereditary prostate cancer are unknown. Identifying additional genetic risk factors for prostate cancer is an active area of medical research.

In addition to genetic changes, researchers have identified many personal and environmental factors that may contribute to a person's risk of developing prostate cancer. These factors include a high-fat diet that includes an excess of meat and dairy and not enough vegetables, a largely inactive (sedentary) lifestyle, obesity, excessive alcohol use, or exposure to certain toxic chemicals. A history of prostate cancer in closely related family members is also an important risk factor, particularly if the cancer occurred at an early age.

Learn more about the genes associated with Prostate cancer

Many cases of prostate cancer are not related to inherited gene changes. These cancers are associated with somatic variants that occur only in certain cells in the prostate.

When prostate cancer is related to inherited gene changes, the way that cancer risk is inherited depends on the gene involved. For example, variants in the BRCA1, BRCA2, and HOXB13 genes are inherited in an autosomal dominant pattern

, which means one copy of the altered gene in each cell is sufficient to increase a person's chance of developing cancer. In other cases, the inheritance of prostate cancer risk is unclear. It is important to note that people inherit an increased risk of cancer, not the disease itself. Not all people who inherit variants in these genes will develop cancer. 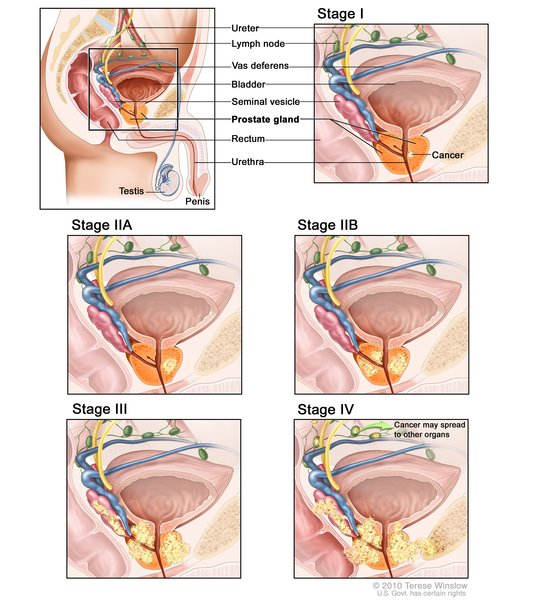