You Are Here:
Home →
Genetics →
Genetic Conditions →
Melanoma
URL of this page: https://medlineplus.gov/genetics/condition/melanoma/

. This cancer typically occurs in areas that are only occasionally sun-exposed; tumors are most commonly found on the back in men and on the legs in women. Melanoma usually occurs on the skin (cutaneous melanoma), but in about 5 percent of cases it develops in melanocytes in other tissues, including the eyes (uveal melanoma

) or mucous membranes that line the body's cavities, such as the moist lining of the mouth (mucosal melanoma). Melanoma can develop at any age, but it most frequently occurs in people in their fifties to seventies and is becoming more common in teenagers and young adults.

Melanoma may develop from an existing mole or other normal skin growth that becomes cancerous (malignant); however, many melanomas are new growths. Melanomas often have ragged edges

and an irregular shape. They can range from a few millimeters

across. They can also be a variety of colors: brown, black, red, pink, blue, or white.

Most melanomas affect only the outermost layer of skin (the epidermis

). If a melanoma becomes thicker and involves multiple layers of skin, it can spread to other parts of the body (metastasize

A large number of moles or other pigmented skin growths on the body, generally more than 25, is associated with an increased risk of developing melanoma. Melanoma is also a common feature of genetic syndromes affecting the skin such as xeroderma pigmentosum. Additionally, individuals who have previously had melanoma are nearly nine times more likely than the general population to develop melanoma again. It is estimated that about 90 percent of individuals with melanoma survive at least 5 years after being diagnosed.

In the United States, melanoma is the fifth most common cancer in men, affecting 30 in 100,000 men per year, and the sixth most common cancer in women, affecting 18 in 100,000 women per year. About 1 in 43 individuals in the United States will develop melanoma in their lifetime. Light-skinned people have a 20 times greater risk of developing melanoma than dark-skinned people.

Melanoma is caused by a combination of environmental and genetic factors. The greatest environmental risk factor for developing melanoma is exposure to ultraviolet (UV) radiation from the sun. The risk for melanoma is greatest in individuals who have brief but intense sun exposure rather than moderate, long-term exposure. UV radiation can also come from tanning beds (indoor tanning).

UV radiation damages DNA. Most of the time, this kind of DNA damage causes cells to self-destruct (undergo apoptosis

are more resistant than other kinds of cells to the effects of UV radiation. Even if their DNA is damaged, melanocytes are unlikely to undergo apoptosis. As abnormal melanocytes continue to grow, they accumulate genetic mutations, particularly in genes that control cell growth and division (proliferation), senescence, and apoptosis. Ultimately, the cells become able to proliferate without control or limit

and can resist cell death, leading to the formation and growth of a melanoma.

Most cases of melanoma are sporadic, which means that the genetic changes are acquired during a person's lifetime and are present only in the melanocytes that give rise to the melanoma. These changes, which are called somatic mutations, are not inherited. Studies suggest that in some cases somatic variations in multiple genes, each with a small effect, combine to increase the risk of developing the condition. Many of these gene variations are associated with a light complexion and increased freckling and moles. However, it is unclear what contribution each of these genetic changes makes to disease risk. Other somatic gene mutations have large effects on melanoma risk and a mutation in one gene is enough to significantly increase the risk of developing cancer. Somatic mutations in the BRAF and CDKN2A genes are some of the most common in sporadic melanoma.

In about 10 percent of cases, melanoma occurs in multiple members of the same family. Unlike sporadic melanoma, these familial cases are typically caused by inherited genetic changes that increase the risk of developing this type of cancer. These genetic changes, which are classified as germline mutations, are present in essentially all of the body's cells. The primary genes involved in familial melanoma are CDKN2A and MC1R. The CDKN2A gene plays a role in regulating cell senescence and the MC1R gene influences skin pigmentation. Shared nongenetic factors can also influence the development of melanoma in family members; for example, family members may live in the same sun-exposed environment. In people with germline mutations, changes in other genes, together with environmental and lifestyle factors, also contribute to the possible development of melanoma.

Learn more about the genes associated with Melanoma

, which means one copy of the altered gene in each cell is sufficient to increase the risk of developing melanoma.

When melanoma occurs as part of a genetic syndrome, the risk of melanoma follows the inheritance pattern of the syndrome. 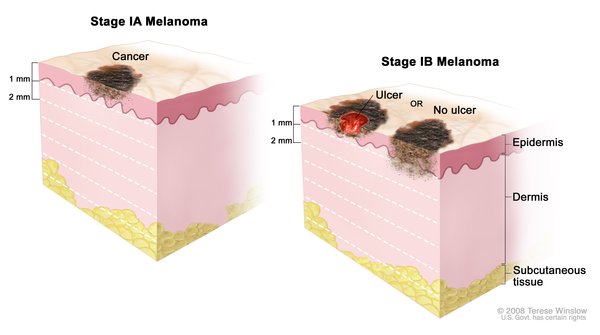