You Are Here:
Home →
Health Topics →
Emphysema
URL of this page: https://medlineplus.gov/emphysema.html

Emphysema is a type of COPD (chronic obstructive pulmonary disease). COPD is a group of lung diseases that make it hard to breathe and get worse over time. The other main type of COPD is chronic bronchitis. Most people with COPD have both emphysema and chronic bronchitis, but how severe each type is can be different from person to person.

In emphysema, the walls between many of the air sacs in the lungs are damaged. This causes the air sacs to lose their shape and become floppy. The damage also can destroy the walls of the air sacs, leading to fewer and larger air sacs instead of many tiny ones. This makes it harder for your lungs to move oxygen in and carbon dioxide out of your body.

The cause of emphysema is usually long-term exposure to irritants that damage your lungs and the airways. In the United States, cigarette smoke is the main cause. Pipe, cigar, and other types of tobacco smoke can also cause emphysema, especially if you inhale them.

Exposure to other inhaled irritants can contribute to emphysema. These include secondhand smoke, air pollution, and chemical fumes or dusts from the environment or workplace.

Who is at risk for emphysema?

The risk factors for emphysema include:

What are the symptoms of emphysema?

Some people with emphysema get frequent respiratory infections such as colds and the flu. In severe cases, emphysema can cause weight loss, weakness in your lower muscles, and swelling in your ankles, feet, or legs.

How is emphysema diagnosed?

What are the treatments for emphysema?

There is no cure for emphysema. However, treatments can help with symptoms, slow the progress of the disease, and improve your ability to stay active. There are also treatments to prevent or treat complications of the disease. Treatments include:

If you have emphysema, it's important to know when and where to get help for your symptoms. You should get emergency care if you have severe symptoms, such as trouble catching your breath or talking. Call your health care provider if your symptoms are getting worse or if you have signs of an infection, such as a fever.

Can emphysema be prevented?

Since smoking causes most cases of emphysema, the best way to prevent it is to not smoke. It's also important to try to avoid lung irritants such as secondhand smoke, air pollution, chemical fumes, and dusts. 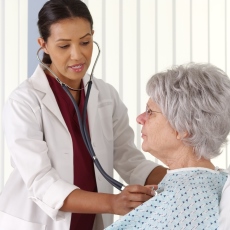 The primary NIH organization for research on Emphysema is the National Heart, Lung, and Blood Institute