What is sudden cardiac arrest (SCA)?

Sudden cardiac arrest (SCA) is a condition in which the heart suddenly stops beating. When that happens, blood stops flowing to the brain and other vital organs. If it is not treated, SCA usually causes death within minutes. But quick treatment with a defibrillator may be lifesaving.

How is sudden cardiac arrest (SCA) different from a heart attack?

Sometimes an SCA can happen after or during recovery from a heart attack.

Your heart has an electrical system that controls the rate and rhythm of your heartbeat. An SCA can happen when the heart's electrical system is not working right and causes irregular heartbeats. Irregular heartbeats are called arrhythmias. There are different types. They may cause the heart to beat too fast, too slow, or with an irregular rhythm. Some can cause the heart to stop pumping blood to the body; this is the type that causes SCA.

Certain diseases and conditions can cause the electrical problems that lead to SCA. They include

Who is at risk for sudden cardiac arrest (SCA)?

You are at higher risk for SCA if you

What are the symptoms of sudden cardiac arrest (SCA)?

Usually, the first sign of SCA is loss of consciousness (fainting). This happens when the heart stops beating.

Some people may have a racing heartbeat or feel dizzy or light-headed just before they faint. And sometimes people have chest pain, shortness of breath, nausea, or vomiting in the hour before they have an SCA.

SCA happens without warning and requires emergency treatment. Health care providers rarely diagnose SCA with medical tests as it's happening. Instead, it is usually diagnosed after it happens. Providers do this by ruling out other causes of a person's sudden collapse.

If you are at high risk for SCA, your provider may refer you to a cardiologist, a doctor who specializes in heart diseases. The cardiologist may ask you to get various heart health tests to see how well you heart is working. He or she will work with you to decide whether you need treatment to prevent SCA.

What are the treatments for sudden cardiac arrest (SCA)?

Most police officers, emergency medical technicians, and other first responders are trained and equipped to use a defibrillator. Call 9-1-1 right away if someone has signs or symptoms of SCA. The sooner you call for help, the sooner lifesaving treatment can begin.

What should I do if I think that someone has had an SCA?

Many public places such as schools, businesses, and airports have automated external defibrillators (AEDs). AEDs are special defibrillators that untrained people can use if they think that someone has had SCA. AEDS are programmed to give an electric shock if they detect a dangerous arrhythmia. This prevents giving a shock to someone who may have fainted but isn't having SCA.

If you see someone who you think has had SCA, you should give cardiopulmonary resuscitation (CPR) until defibrillation can be done.

What are the treatments after surviving sudden cardiac arrest (SCA)?

If you survive SCA, you'll likely be admitted to a hospital for ongoing care and treatment. In the hospital, your medical team will closely watch your heart. They may give you medicines to try to reduce the risk of another SCA.

They will also try to find out what caused your SCA. If you're diagnosed with coronary artery disease, you may have an angioplasty or coronary artery bypass surgery. These procedures help restore blood flow through narrowed or blocked coronary arteries.

Often, people who have had SCA get a device called an implantable cardioverter defibrillator (ICD). This small device is surgically placed under the skin in your chest or abdomen. An ICD uses electric pulses or shocks to help control dangerous arrhythmias. 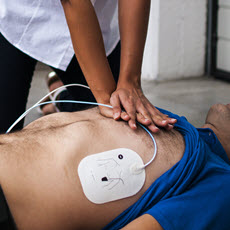 The primary NIH organization for research on Sudden Cardiac Arrest is the National Heart, Lung, and Blood Institute