You Are Here:
Home →
Health Topics →
Tremor
URL of this page: https://medlineplus.gov/tremor.html

What is a tremor?

A tremor is a rhythmic shaking movement in one or more parts of your body. It is involuntary, meaning that you cannot control it. This shaking happens because of muscle contractions.

A tremor is most often in your hands, but it could also affect your arms, head, vocal cords, trunk, and legs. It may come and go, or it may be constant. Tremor can happen on its own or be caused by another disorder.

What are the types of tremor?

There are several types of tremor, including:

Generally, tremor is caused by a problem in the deep parts of the brain that control movements. For most types, the cause is unknown. Some types are inherited and run in families. There can also be other causes, such as:

Who is at risk for tremor?

Anyone can get tremor, but it is most common in middle-aged and older adults. For certain types, having a family history raises your risk of getting it.

What are the symptoms of tremor?

Symptoms of tremor may include:

How is tremor diagnosed?

What are the treatments for tremor?

There is no cure for most forms of tremor, but there are treatments to help manage symptoms. In some cases, the symptoms may be so mild that you do not need treatment.

Finding the right treatment depends on getting the right diagnosis of the cause. Tremor caused by another medical condition may get better or go away when you treat that condition. If your tremor is caused by a certain medicine, stopping that medicine usually makes the tremor go away.

Treatments for tremor where the cause is not found include:

If you find that caffeine and other stimulants trigger your tremors, it may be helpful to cut them from your diet. 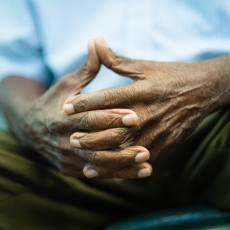