You Are Here:
Home →
Genetics →
Genetic Conditions →
Coloboma
URL of this page: https://medlineplus.gov/genetics/condition/coloboma/

Coloboma is an eye abnormality that occurs before birth. Colobomas are missing pieces of tissue in structures that form the eye. They may appear as notches or gaps in one of several parts of the eye

, including the colored part of the eye called the iris; the retina

, which is the specialized light-sensitive tissue that lines the back of the eye; the blood vessel layer under the retina called the choroid; or the optic nerves

, which carry information from the eyes to the brain.

Colobomas may be present in one or both eyes and, depending on their size and location, can affect a person's vision. Colobomas affecting the iris, which result in a "keyhole" appearance of the pupil, generally do not lead to vision loss. Colobomas involving the retina result in vision loss in specific parts of the visual field. Large retinal colobomas or those affecting the optic nerve can cause low vision, which means vision loss that cannot be completely corrected with glasses or contact lenses.

People with coloboma may also have other eye abnormalities, including clouding of the lens of the eye (cataract

), increased pressure inside the eye (glaucoma

) that can damage the optic nerve, vision problems such as nearsightedness (myopia

), involuntary back-and-forth eye movements (nystagmus), or separation of the retina from the back of the eye (retinal detachment

Some individuals have coloboma as part of a syndrome that affects other organs and tissues in the body. These forms of the condition are described as syndromic. When coloboma occurs by itself, it is described as nonsyndromic or isolated.

Colobomas involving the eyeball should be distinguished from gaps that occur in the eyelids. While these eyelid gaps are also called colobomas, they arise from abnormalities in different structures during early development.

Coloboma occurs in approximately 1 in 10,000 people. Because coloboma does not always affect vision or the outward appearance of the eye, some people with this condition are likely undiagnosed.

Because the optic fissure forms at the bottom of the eyeball during development, colobomas occur in the lower half of the eye. The particular structure within the eye affected by the coloboma depends on the part of the optic fissure that failed to close.

Coloboma may be caused by changes in many genes involved in the early development of the eye, most of which have not been identified. The condition may also result from a chromosomal abnormality affecting one or more genes. Most genetic changes associated with coloboma have been identified only in very small numbers of affected individuals.

The risk of coloboma may also be increased by environmental factors that affect early development, such as exposure to alcohol during pregnancy. In these cases, affected individuals usually have other health problems in addition to coloboma.

Learn more about the genes associated with Coloboma

In cases when it is passed down in families, coloboma can have different inheritance patterns. Isolated coloboma is sometimes inherited in an autosomal dominant pattern

, which means one copy of an altered gene in each cell is sufficient to cause the disorder. Isolated coloboma can also be inherited in an autosomal recessive pattern

, which means both copies of a gene in each cell have mutations. The parents of an individual with an autosomal recessive condition each carry one copy of a mutated gene, but they typically do not show signs and symptoms of the condition.

patterns of inheritance. X-linked means that a gene associated with this condition is located on the X chromosome, which is one of the two sex chromosomes

. A characteristic of X-linked inheritance is that fathers cannot pass X-linked traits to their sons.

X-linked recessive means that in females, a mutation would have to occur in both copies of a gene to cause the disorder. In males, one altered copy of a gene in each cell is sufficient to cause the condition. Because it is unlikely that females will have two altered copies of a particular gene, males are affected by X-linked recessive disorders much more frequently than females.

When coloboma occurs as a feature of a genetic syndrome or chromosomal abnormality, it may cluster in families according to the inheritance pattern for that condition, which may be autosomal dominant, autosomal recessive, or X-linked. 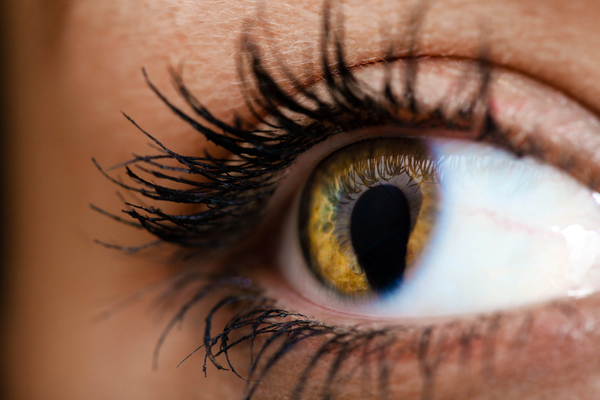