You Are Here:
Home →
Health Topics →
Drugs and Young People
URL of this page: https://medlineplus.gov/drugsandyoungpeople.html

What is drug use?

Drug use, or misuse, includes:

Why are drugs especially dangerous for young people?

Young people's brains are growing and developing until they are their mid-20's. This is especially true of the prefrontal cortex, which is used to make decisions. Taking drugs when young can interfere with developmental processes occurring in the brain. It can also affect their decision-making. They may be more likely to do risky things, such as unsafe sex and dangerous driving.

The earlier young people start using drugs, the greater their chances of continuing to use them and become addicted later in life.Taking drugs when you are young can contribute to the development of adult health problems, such as heart disease, high blood pressure, and sleep disorders.

Which drugs most commonly used by young people?

Why do young people take drugs?

There are many different reasons why a young person may take drugs, including:

Which young people are at risk for drug use?

Different factors may raise a young person's risk for drug use, including:

What are the signs that a young person has a drug problem?

Can drug use in young people be prevented?

You can help prevent your children from using drugs through: 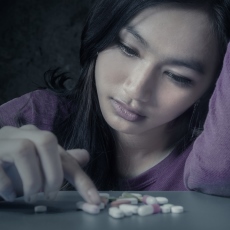