Klinefelter syndrome is a chromosomal condition in boys and men that can affect physical and intellectual development. Most commonly, affected individuals are taller than average are unable to father biological children (infertile); however the signs and symptoms of Klinefelter syndrome vary among boys and men with this condition. In some cases, the features of the condition are so mild that the condition is not diagnosed until puberty or adulthood, and researchers believe that up to 75 percent of affected men and boys are never diagnosed.

Boys and men with Klinefelter syndrome typically have small testes that produce a reduced amount of testosterone (primary testicular insufficiency). Testosterone is the hormone that directs male sexual development before birth and during puberty. Without treatment, the shortage of testosterone can lead to delayed or incomplete puberty, breast enlargement (gynecomastia), decreased muscle mass, decreased bone density, and a reduced amount of facial and body hair. As a result of the small testes and decreased hormone production, affected males are infertile but may benefit from assisted reproductive technologies. Some affected individuals also have differences in their genitalia, including undescended testes (cryptorchidism), the opening of the urethra on the underside of the penis (hypospadias), or an unusually small penis (micropenis).

Other physical changes associated with Klinefelter syndrome are usually subtle. Older children and adults with the condition tend to be somewhat taller than their peers. Other differences can include abnormal fusion of certain bones in the forearm (radioulnar synostosis), curved pinky fingers (fifth finger clinodactyly

Children with Klinefelter syndrome may have low muscle tone (hypotonia) and problems with coordination that may delay the development of motor skills, such as sitting, standing, and walking. Affected boys often have learning disabilities, resulting in mild delays in speech and language development and problems with reading. Boys and men with Klinefelter syndrome tend to have better receptive language skills (the ability to understand speech) than expressive language skills (vocabulary and the production of speech) and may have difficulty communicating and expressing themselves.

Nearly half of all men with Klinefelter syndrome develop metabolic syndrome, which is a group of conditions that include type 2 diabetes, high blood pressure (hypertension), increased belly fat, high levels of fats (lipids) such as cholesterol and triglycerides in the blood. Compared with unaffected men, adults with Klinefelter syndrome also have an increased risk of developing involuntary trembling (tremors), breast cancer (if gynecomastia develops), thinning and weakening of the bones (osteoporosis), and autoimmune disorders such as systemic lupus erythematosus and rheumatoid arthritis. (Autoimmune disorders are a large group of conditions that occur when the immune system attacks the body's own tissues and organs.)

Klinefelter syndrome affects about 1 in 650 newborn boys. It is among the most common sex chromosome disorders, which are conditions caused by changes in the number of sex chromosomes

Klinefelter syndrome is a sex chromosome

disorder in boys and men that results from the presence of an extra X chromosome in cells. People typically have 46 chromosomes

Learn more about the chromosome associated with Klinefelter syndrome

Klinefelter syndrome is not inherited; the addition of an extra X chromosome occurs during the formation of reproductive cells (eggs or sperm) in one of an affected person's parents. During cell division

Mosaic Klinefelter syndrome (46,XY/47,XXY) is also not inherited. It occurs as a random error during cell division early in fetal development. As a result, some of the body's cells have the usual one X chromosome and one Y chromosome (46,XY), and other cells have an extra copy of the X chromosome (47,XXY). 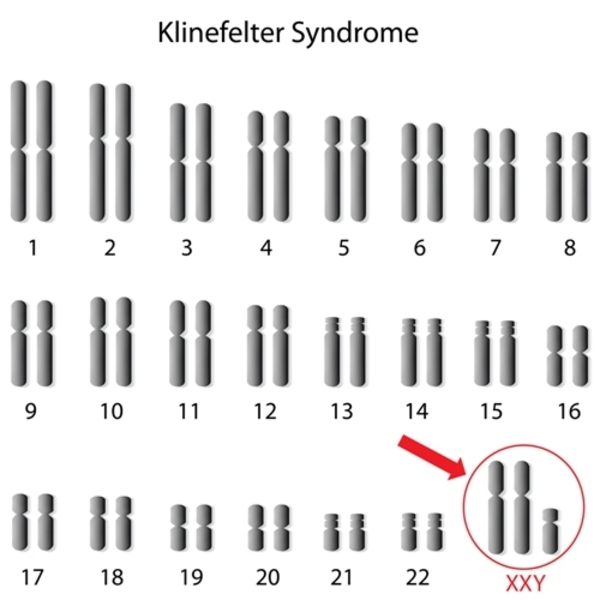