Type 2 diabetes is a disorder characterized by abnormally high blood sugar levels. In this form of diabetes, the body stops using and making insulin

properly. Insulin is a hormone produced in the pancreas

(a type of sugar) is passed from the blood into cells, where it is used as an energy source. When blood sugar levels are high (such as after a meal), the pancreas releases insulin to move the excess glucose into cells, which reduces the amount of glucose in the blood.

Most people who develop type 2 diabetes first have insulin resistance, a condition in which the body's cells use insulin less efficiently than normal. As insulin resistance develops, more and more insulin is needed to keep blood sugar levels in the normal range. To keep up with the increasing need, insulin-producing cells in the pancreas (called beta cells) make larger amounts of insulin. Over time, the beta cells become less able to respond to blood sugar changes, leading to an insulin shortage that prevents the body from reducing blood sugar levels effectively. Most people have some insulin resistance as they age, but inadequate exercise and excessive weight gain make it worse, greatly increasing the likelihood of developing type 2 diabetes.

Type 2 diabetes can occur at any age, but it most commonly begins in middle age or later. Signs and symptoms develop slowly over years. They include frequent urination (polyuria), excessive thirst (polydipsia), fatigue, blurred vision, tingling or loss of feeling in the hands and feet (diabetic neuropathy), sores that do not heal well, and weight loss. If blood sugar levels are not controlled through medication or diet, type 2 diabetes can cause long-lasting (chronic) health problems including heart disease and stroke; nerve damage; and damage to the kidneys, eyes, and other parts of the body.

Type 2 diabetes is the most common type of diabetes, accounting for 90 to 95 percent of all cases. In 2015, more than 23 million people in the United States had diagnosed diabetes and an additional 7 million people likely had undiagnosed diabetes. The prevalence of diabetes increases with age, and the disease currently affects more than 20 percent of Americans over age 65. It is the seventh leading cause of death in the United States.

The risk of diabetes varies by ethnic and geographic background. In the United States, the disease is most common in Native Americans and Alaska Natives. It also has a higher prevalence among people of African American or Hispanic ancestry than those of non-Hispanic white or Asian ancestry. Geographically, diabetes is most prevalent in the southern and Appalachian regions of the United States.

The prevalence of diabetes is rapidly increasing worldwide. Due to an increase in inactive (sedentary) lifestyles, obesity, and other risk factors, the frequency of this disease has more than quadrupled in the past 35 years.

The causes of type 2 diabetes are complex. This condition results from a combination of genetic and lifestyle factors, some of which have not been identified.

Studies have identified at least 150 DNA variations that are associated with the risk of developing type 2 diabetes. Most of these changes are common and are present both in people with diabetes and in those without. Each person has some variations that increase risk and others that reduce risk. It is the combination of these changes that helps determine a person's likelihood of developing the disease.

The majority of genetic variations associated with type 2 diabetes are thought to act by subtly changing the amount, timing, and location of gene activity (expression). These changes in expression affect genes involved in many aspects of type 2 diabetes, including the development and function of beta cells in the pancreas

, the release and processing of insulin

, and cells' sensitivity to the effects of insulin. However, for many of the variations that have been associated with type 2 diabetes, the mechanism by which they contribute to disease risk is unknown.

Genetic variations likely act together with health and lifestyle factors to influence an individual's overall risk of type 2 diabetes. All of these factors are related, directly or indirectly, to the body's ability to produce and respond to insulin. Health conditions that predispose to the disease include overweight or obesity, insulin resistance, prediabetes (higher-than-normal blood sugar levels that do not reach the cutoff for diabetes), and a form of diabetes called gestational diabetes that occurs during pregnancy. Lifestyle factors including smoking, a poor diet, and physical inactivity also increase the risk of type 2 diabetes.

Type 2 diabetes does not have a clear pattern of inheritance, although many affected individuals have at least one close family member, such as a parent or sibling, with the disease. The risk of developing type 2 diabetes increases with the number of affected family members. The increased risk is likely due in part to shared genetic factors, but it is also related to lifestyle influences (such as eating and exercise habits) that are shared by members of a family. 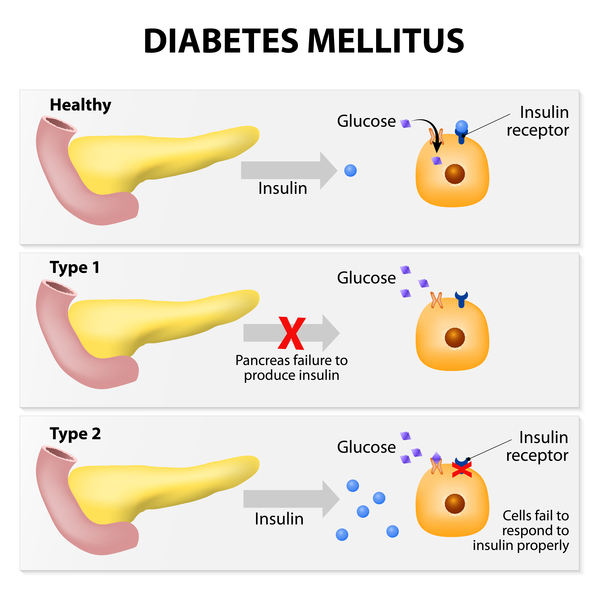