You Are Here:
Home →
Health Topics →
Ankylosing Spondylitis
URL of this page: https://medlineplus.gov/ankylosingspondylitis.html

Ankylosing spondylitis is a type of arthritis of the spine. It causes inflammation between your vertebrae, which are the bones that make up your spine, and in the joints between your spine and pelvis. In some people, it can affect other joints.

AS is more common and more severe in men. It often runs in families. The cause is unknown, but it is likely that both genes and factors in the environment play a role.

Early symptoms of AS include back pain and stiffness. These problems often start in late adolescence or early adulthood. Over time, AS can fuse your vertebrae together, limiting movement. Some people have symptoms that come and go. Others have severe, ongoing pain.

A diagnosis of AS is based on your medical history and a physical examination. You may also have imaging or blood tests.

AS has no cure, but medicines can relieve symptoms and may keep the disease from getting worse. Eating a healthy diet, not smoking, and exercising can also help. In rare cases, you may need surgery to straighten the spine.

NIH: National Institute of Arthritis and Musculoskeletal and Skin Disease 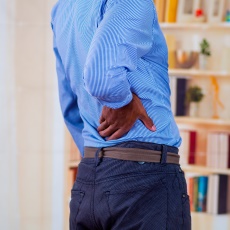