You Are Here:
Home →
Health Topics →
Suicide
URL of this page: https://medlineplus.gov/suicide.html

Suicide is a major public health problem and a leading cause of death in the United States. The effects of suicide go beyond the person who acts to take his or her life. It can also have a lasting effect on family, friends, and communities.

Who is at risk for suicide?

Suicide does not discriminate. It can touch anyone, anywhere, at any time. But there are certain factors that can contribute to the risk of suicide, including:

What are the warning signs for suicide?

The warning signs for suicide include:

Some people may tell others about their suicidal thoughts. But others may try to hide them. This can make some of the signs harder to spot.

What should I do if I need help or know someone who does?

If you or someone you know has the warning signs for suicide, get help right away, especially if there is a change in behavior. If it is an emergency, dial 911. Otherwise there are five steps that you can take: 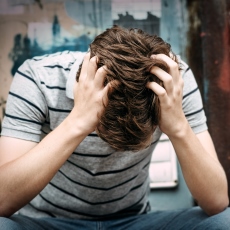