Also called: PTSD
On this page

What is post-traumatic stress disorder (PTSD)?

Post-traumatic stress disorder (PTSD) is a mental health disorder that some people develop after they experience or see a traumatic event. The traumatic event may be life-threatening, such as combat, a natural disaster, a car accident, or sexual assault. But sometimes the event is not necessarily a dangerous one. For example, the sudden, unexpected death of a loved one can also cause PTSD.

It's normal to feel afraid during and after a traumatic situation. The fear triggers a "fight-or-flight" response. This is your body's way of helping to protect itself from possible harm. It causes changes in your body such as the release of certain hormones and increases in alertness, blood pressure, heart rate, and breathing.

In time, most people recover from this naturally. But people with PTSD don't feel better. They feel stressed and frightened long after the trauma is over. In some cases, the PTSD symptoms may start later on. They might also come and go over time.

Researchers don't know why some people get PTSD and others don't. Genetics, neurobiology, risk factors, and personal factors may affect whether you get PTSD after a traumatic event.

Who is at risk for post-traumatic stress disorder (PTSD)?

You can develop PTSD at any age. Many risk factors play a part in whether you will develop PTSD. They include:

What are the symptoms of post-traumatic stress disorder (PTSD)?

There are four types of PTSD symptoms, but they may not be the same for everyone. Each person experiences symptoms in their own way. The types are:

The symptoms usually start soon after the traumatic event. But sometimes they may not appear until months or years later. They also may come and go over many years.

If your symptoms last longer than four weeks, cause you great distress, or interfere with your work or home life, you might have PTSD.

A health care provider who has experience helping people with mental illnesses can diagnose PTSD. The provider will do a mental health screening and may also do a physical exam. To get a diagnosis of PTSD, you must have all of these symptoms for at least one month:

What are the treatments for post-traumatic stress disorder (PTSD)?

The main treatments for PTSD are talk therapy, medicines, or both. PTSD affects people differently, so a treatment that works for one person may not work for another. If you have PTSD, you need to work with a mental health professional to find the best treatment for your symptoms.:

There are certain factors that can help reduce the risk of developing PTSD. These are known as resilience factors, and they include:

Researchers are studying the importance of the resilience and risk factors for PTSD. They are also studying how genetics and neurobiology can affect the risk of PTSD. With more research, someday it may be possible to predict who is likely to develop PTSD. This could also help in finding ways to prevent it. 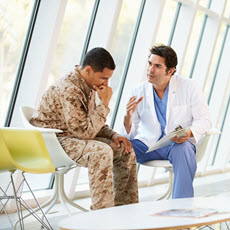