You Are Here:
Home →
Health Topics →
Mpox
URL of this page: https://medlineplus.gov/mpox.html

Mpox, which used to be called monkeypox, is a rare disease caused by infection with the mpox virus. The mpox virus is in the same family of viruses as the smallpox virus. But mpox is less contagious than smallpox. And its disease causes milder symptoms and is usually not fatal.

In the past, most of the people who got mpox lived in certain parts of central and western Africa, had traveled there, or had been exposed to infected animals imported from there. During the recent outbreak, the disease has been found in people who live in other countries, including the United States.

How does mpox spread?

Someone who has mpox can spread it from the time their symptoms start until their rash has fully healed, all scabs have fallen off, and a fresh layer of skin has formed. This usually takes 2-4 weeks.

What are the symptoms of mpox?

The symptoms of mpox usually start within 3 weeks from the time you were exposed to the virus. The symptoms may include:

You may have all or only a few symptoms:

How is mpox diagnosed?

To find out if you have mpox, your provider:

What are the treatments for mpox?

There are no treatments specifically for mpox, but many people get better on their own.

Since mpox and smallpox are similar, antiviral medicines that protect against smallpox may also help treat mpox. Antiviral medicines may be recommended for people who are more likely to get severely ill, such as patients who have weakened immune systems.

Can mpox be prevented?

There are steps you can take to help prevent mpox:

If you are sick with mpox it is recommended that you stay home while you are sick, if possible. If you have an active rash or other symptoms, it would be best to stay in a separate room from your family members and pets if you can.

The U. S. Centers for Disease Control and Prevention (CDC) recommends vaccination for people who have been exposed to mpox or who are more likely to get mpox. 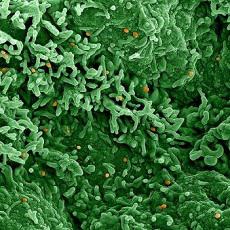 Find health information in languages other than English on Mpox