You Are Here:
Home →
Health Topics →
Histoplasmosis
URL of this page: https://medlineplus.gov/histoplasmosis.html

Histoplasmosis is a disease caused by a fungus (or mold) called Histoplasma. The fungus is common in the eastern and central United States. It grows in soil and material contaminated with bat or bird droppings. You get infected by breathing the fungal spores. You cannot get the infection from someone else.

Histoplasmosis is often mild, with no symptoms. If you do get sick, it usually affects your lungs. Symptoms include feeling ill, fever, chest pains, and a dry cough. In severe cases, histoplasmosis spreads to other organs. This is called disseminated disease. It is more common in infants, young children, older adults, and people with immune system problems.

Your doctor might do a variety of tests to make the diagnosis, including a chest x-ray, CT scan of the lungs, or examining blood, urine, or tissues for signs of the fungus. Mild cases usually get better without treatment. Treatment of severe or chronic cases is with antifungal drugs. 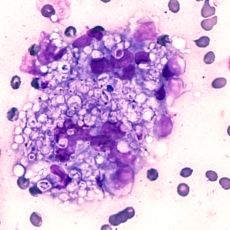