You Are Here:
Home →
Health Topics →
Endometriosis
URL of this page: https://medlineplus.gov/endometriosis.html

Also called: Endo
On this page

The uterus, or womb, is the place where a baby grows when a person is pregnant. The uterus is lined with tissue (endometrium). Endometriosis is a disease in which tissue that is similar to the lining of the uterus grows in other places in your body. These patches of tissue are called "implants," "nodules," or "lesions." They are most often found:

In rare cases, the tissue may grow on your lungs or in other parts of your body.

The cause of endometriosis is unknown.

Who is at risk for endometriosis?

Endometriosis can affect anyone who menstruates. Certain factors can raise or lower your risk of getting it.

You are at higher risk if:

You have a lower risk if:

What are the symptoms of endometriosis?

The main symptoms of endometriosis are:

Other possible symptoms include:

How is endometriosis diagnosed?

Surgery is the only way to know for sure that you have endometriosis. First, however, your health care provider will ask about your symptoms and medical history. You will have a pelvic exam and may have some imaging tests.

The most common surgery to diagnose endometriosis is a laparoscopy. This is a type of surgery that uses a laparoscope, a thin tube with a camera and light. The surgeon inserts the laparoscope through a small cut in the skin. Your provider can make a diagnosis based on how the patches of endometriosis look. He or she may also do a biopsy to get a tissue sample.

What are the treatments for endometriosis?

There is no cure for endometriosis, but there are treatments for the symptoms. Your provider will work with you to decide which treatments would be best for you.

Treatments for endometriosis pain include:

Treatments for infertility caused by endometriosis include: 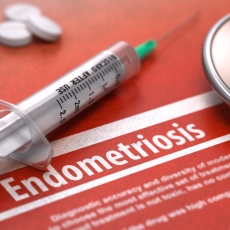