You Are Here:
Home →
Health Topics →
Delirium
URL of this page: https://medlineplus.gov/delirium.html

Delirium is a mental state in which you are confused, disoriented, and not able to think or remember clearly. It usually starts suddenly. It is often temporary and treatable.

There are three types of delirium:

There are many different problems that can cause delirium. Some of the more common causes include:

Who is at risk for delirium?

Certain factors put you at risk for delirium, including:

What are the symptoms of delirium?

The symptoms of delirium usually start suddenly, over a few hours or a few days. They often come and go. The most common symptoms include:

How is delirium diagnosed?

Delirium and dementia have similar symptoms, so it can be hard to tell them apart. They can also occur together. Delirium starts suddenly and can cause hallucinations. The symptoms may get better or worse and can last for hours or weeks. On the other hand, dementia develops slowly and does not cause hallucinations. The symptoms are stable and may last for months or years.

What are the treatments for delirium?

Treatment of delirium focuses on the causes and symptoms of delirium. The first step is to identify the cause. Often, treating the cause will lead to a full recovery. The recovery may take some time - weeks or sometimes even months. In the meantime, there may be treatments to manage the symptoms, such as:

Can delirium be prevented?

Treating the conditions that can cause delirium may reduce the risk of getting it. Hospitals can help lower the risk of delirium by avoiding sedatives and making sure that the room is kept quiet, calm, and well-lit. It can also help to have family members around and to have the same staff members treat the person. 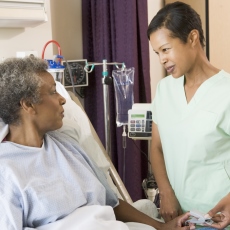