You Are Here:
Home →
Health Topics →
Reflux in Children
URL of this page: https://medlineplus.gov/refluxinchildren.html

What are reflux (GER) and GERD?

The esophagus is the tube that carries food from your mouth to your stomach. If your child has reflux, his or her stomach contents come back up into the esophagus. Another name for reflux is gastroesophageal reflux (GER).

GERD stands for gastroesophageal reflux disease. It is a more serious and long-lasting type of reflux. If your child has reflux more than twice a week for a few weeks, it could be GERD.

What causes reflux and GERD in children?

In children who have reflux and GERD, this muscle becomes weak or relaxes when it shouldn't, and the stomach contents flow back into the esophagus. This can happen because of:

How common are reflux and GERD in children?

What are the symptoms of reflux and GERD in children?

Your child might not even notice reflux. But some children taste food or stomach acid at the back of the mouth.

In children, GERD can cause:

How do doctors diagnose reflux and GERD in children?

In most cases, a doctor diagnoses reflux by reviewing your child's symptoms and medical history. If the symptoms do not get better with lifestyle changes and anti-reflux medicines, your child may need testing to check for GERD or other problems.

Several tests can help a doctor diagnose GERD. Sometimes doctors order more than one test to get a diagnosis. Commonly-used tests include:

What lifestyle changes can help treat my child's reflux or GERD?

Sometimes reflux and GERD in children can be treated with lifestyle changes:

What treatments might the doctor give for my child's GERD?

If changes at home do not help enough, the doctor may recommend medicines to treat GERD. The medicines work by lowering the amount of acid in your child's stomach.

Some medicines for GERD in children are over-the-counter, and some are prescription medicines. They include:

If these don't help and your child still has severe symptoms, then surgery might be an option. A pediatric gastroenterologist, a doctor who treats children who have digestive diseases, would do the surgery. 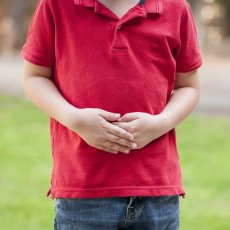