You Are Here:
Home →
Health Topics →
Polio and Post-Polio Syndrome
URL of this page: https://medlineplus.gov/polioandpostpoliosyndrome.html

Polio, or poliomyelitis, is a disease that spreads from person to person. It is caused by the poliovirus. The virus attacks the nervous system. In serious cases, it can cause paralysis (where you can't move parts of the body). The paralysis may be lifelong and can sometimes be life-threatening.

Because of vaccines, polio is rare in the United States. But polio does occur in some parts of the world, and travelers can spread the virus.

How does polio spread?

The poliovirus is very contagious. It spreads through contact with:

People who have the infection can spread it to others just before and up to several weeks after the symptoms appear. People who don't have symptoms can still spread the virus to others and make them sick.

Who is more likely to develop polio?

Polio mainly affects children under age 5. But people of any age (including adults) who are unvaccinated are at risk of developing polio. People who live in or travel to areas where there is polio are more likely to get polio.

What are the symptoms of polio?

In rare cases, polio can be very serious. It can lead to:

What is post-polio syndrome (PPS)?

Post-polio syndrome (PPS) is a condition that affects polio survivors many years after they recovered from polio. It usually happens 15-40 years later. It is not contagious.

People who get PPS start having new weakening in muscles that were previously affected by the polio infection. Symptoms may range from mild to serious. The symptoms of PPS include:

PPS is rarely life-threatening, but the symptoms can interfere with your daily life.

How is polio diagnosed?

If you think you or someone in your family has symptoms of polio, call your healthcare provider right away or go to an emergency room.

To find out if you or your child has polio, the provider:

What are the treatments for polio and post-polio syndrome (PPS)?

There is no cure or specific treatment for polio. For a mild case, getting rest and drinking plenty of liquids may help with some of the symptoms.

If the polio is more serious, you or your child may need:

There is no cure for PPS. Treatments may help you manage your symptoms. They include:

Can polio be prevented?

There are two types of vaccine that can prevent polio:

There is a one-time IPV booster. It may be given to adults who have completed their polio vaccinations but are at higher risk of contact with poliovirus. You may be at higher risk if you are:

Another way to help prevent the spread of polio is to wash your hands often with soap and water. Alcohol-based hand sanitizers will not kill poliovirus. 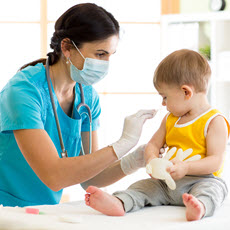