You Are Here:
Home →
Health Topics →
Parkinson's Disease
URL of this page: https://medlineplus.gov/parkinsonsdisease.html

Parkinson's disease (PD) is a type of movement disorder. It happens when nerve cells in the brain don't produce enough of a brain chemical called dopamine. Sometimes it is genetic, but most cases do not seem to run in families. Exposure to chemicals in the environment might play a role.

Symptoms begin gradually, often on one side of the body. Later they affect both sides. They include:

As symptoms get worse, people with the disease may have trouble walking, talking, or doing simple tasks. They may also have problems such as depression, sleep problems, or trouble chewing, swallowing, or speaking.

There is no specific test for PD, so it can be difficult to diagnose. Doctors use a medical history and a neurological examination to diagnose it.

PD usually begins around age 60, but it can start earlier. It is more common in men than in women. There is no cure for PD. A variety of medicines sometimes help symptoms dramatically. Surgery and deep brain stimulation (DBS) can help severe cases. With DBS, electrodes are surgically implanted in the brain. They send electrical pulses to stimulate the parts of the brain that control movement. 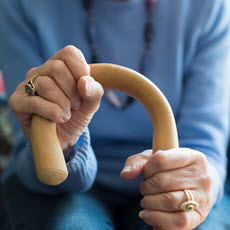 Find health information in languages other than English on Parkinson's Disease