You Are Here:
Home →
Genetics →
Help Me Understand Genetics →
Gene Therapy and Other Medical Advances →
What are mRNA vaccines and how do they work?
URL of this page: https://medlineplus.gov/genetics/understanding/therapy/mrnavaccines/

What are mRNA vaccines and how do they work?

Vaccines help prepare the body to fight foreign invaders (pathogens such as bacteria or viruses), to prevent infection. All vaccines introduce into the body a harmless piece of a particular bacteria or virus, triggering an immune response. Most vaccines contain a weakened or killed bacteria or virus. However, scientists have developed a new type of vaccine that uses a molecule called messenger RNA (or mRNA for short) rather than part of an actual bacteria or virus. Messenger RNA is a type of RNA that is necessary for protein production. In cells, mRNA uses the information in genes to create a blueprint for making proteins. Once cells finish making a protein, they quickly break down the mRNA. mRNA from vaccines does not enter the nucleus and does not alter DNA.

mRNA vaccines work by introducing a piece of mRNA that corresponds to a viral protein, usually a small piece of a protein found on the virus’s outer membrane. (Individuals who get an mRNA vaccine are not exposed to the virus, nor can they become infected by the vaccine.) Using this mRNA blueprint, cells produce the viral protein. As part of a normal immune response, the immune system recognizes that the protein is foreign and produces specialized proteins called antibodies. Antibodies help protect the body against infection by recognizing individual viruses or other pathogens, attaching to them, and marking the pathogens for destruction. Once produced, antibodies remain in the body, even after the body has rid itself of the pathogen, so that the immune system can quickly respond if exposed again. If a person is exposed to a virus after receiving mRNA vaccination for it, antibodies can quickly recognize it, attach to it, and mark it for destruction before it can cause serious illness.

Like all vaccines in the United States, mRNA vaccines require authorization or approval from the Food and Drug Administration (FDA) before they can be used. Currently vaccines for COVID-19, the disease caused by the SARS-CoV-2 coronavirus, are the only authorized or approved mRNA vaccines. These vaccines use mRNA that directs cells to produce copies of a protein on the outside of the coronavirus known as the “spike protein”. Researchers are studying how mRNA might be used to develop vaccines for additional infectious diseases.

Microscopic image of SARS-CoV-2, the virus that causes COVID-19. Spike proteins are seen surrounding the outer membrane of each virus particle. 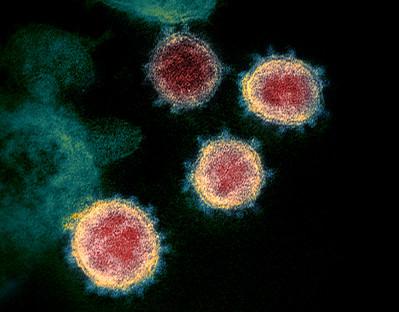 For more information about mRNA vaccines:

MedlinePlus offers many additional resources with information about mRNA vaccines, specifically relating to their use in COVID-19

The National Institute of Allergy and Infectious Diseases provides an in depth Q&A about the COVID-19 vaccines.

The Centers for Disease Control and Prevention has a fact sheet on mRNA vaccines.

Topics in the Gene Therapy and Other Medical Advances chapter