You Are Here:
Home →
Genetics →
Help Me Understand Genetics →
How Genes Work →
How do genes direct the production of proteins?
URL of this page: https://medlineplus.gov/genetics/understanding/howgeneswork/makingprotein/

How do genes direct the production of proteins?

Most genes contain the information needed to make functional molecules called proteins. (A few genes produce regulatory molecules that help the cell assemble proteins.) The journey from gene to protein is complex and tightly controlled within each cell. It consists of two major steps: transcription and translation. Together, transcription and translation are known as gene expression.

During the process of transcription, the information stored in a gene's DNA is passed to a similar molecule called RNA (ribonucleic acid) in the cell nucleus. Both RNA and DNA are made up of a chain of building blocks called nucleotides, but they have slightly different chemical properties. The type of RNA that contains the information for making a protein is called messenger RNA (mRNA) because it carries the information, or message, from the DNA out of the nucleus into the cytoplasm.

Translation, the second step in getting from a gene to a protein, takes place in the cytoplasm. The mRNA interacts with a specialized complex called a ribosome, which "reads" the sequence of mRNA nucleotides. Each sequence of three nucleotides, called a codon, usually codes for one particular amino acid. (Amino acids are the building blocks of proteins.) A type of RNA called transfer RNA (tRNA) assembles the protein, one amino acid at a time. Protein assembly continues until the ribosome encounters a “stop” codon (a sequence of three nucleotides that does not code for an amino acid).

The flow of information from DNA to RNA to proteins is one of the fundamental principles of molecular biology. It is so important that it is sometimes called the “central dogma.”

Through the processes of transcription and translation, information from genes is used to make proteins. 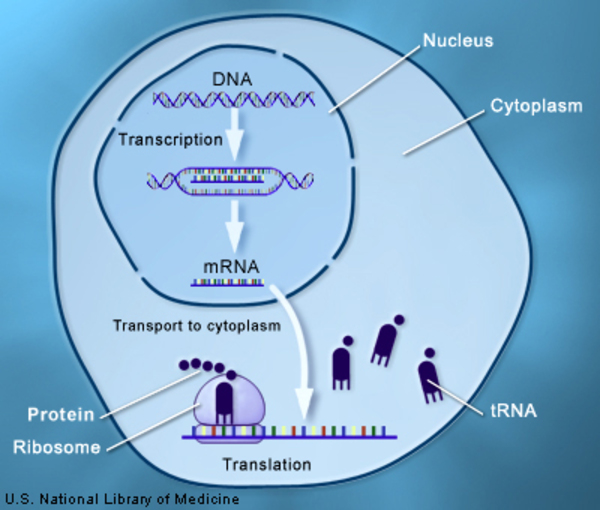 For more information about making proteins:

The Genetic Science Learning Center at the University of Utah offers an interactive introduction to transcription and translation.

The New Genetics, a publication of the National Institute of General Medical Sciences, includes discussions of transcription and translation.

Biointeractive from the Howard Hughes Medical Institute illustrates the stages in the flow of information from DNA to RNA to protein. This tool also gives examples of how modern technologies that target the different stages are used to treat genetic diseases.