You Are Here:
Home →
Genetics →
Help Me Understand Genetics →
How Genes Work →
How do geneticists indicate the location of a gene?
URL of this page: https://medlineplus.gov/genetics/understanding/howgeneswork/genelocation/

How do geneticists indicate the location of a gene?

Geneticists use maps to describe the location of a particular gene on a chromosome. One type of map uses the cytogenetic location to describe a gene’s position. The cytogenetic location is based on a distinctive pattern of bands created when chromosomes are stained with certain chemicals. Another type of map uses the molecular location, which is a precise description of a gene's position on a chromosome. The molecular location is based on the sequence of DNA building blocks (nucleotides) that make up the chromosome.

Geneticists use a standardized way of describing a gene's cytogenetic location. In most cases, the location describes the position of a particular band on a stained chromosome:

It can also be written as a range of bands, if less is known about the exact location:

The combination of numbers and letters provide a gene's “address” on a chromosome. This address is made up of several parts:

The CFTR gene is located on the long arm of chromosome 7 at position 7q31.2. 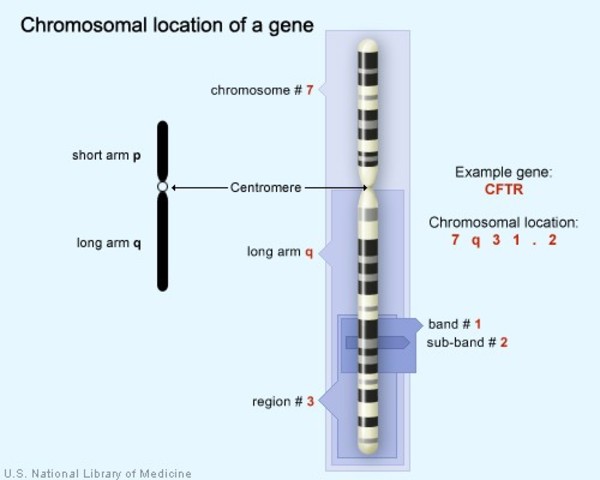 The Human Genome Project, an international research effort completed in 2003, determined the sequence of nucleotides for each human chromosome. This sequence information allows researchers to provide a more specific address than the cytogenetic location for many genes. A gene’s molecular address pinpoints the location of that gene in terms of nucleotides. It describes the gene’s precise position on a chromosome and indicates the size of the gene. Knowing the molecular location also allows researchers to determine exactly how far a gene is from other genes on the same chromosome.

For more information on genetic mapping:

Information about assembling and annotating the genome is available from NCBI.