You Are Here:
Home →
Genetics →
Help Me Understand Genetics →
Gene Therapy and Other Medical Advances →
How does gene therapy work?
URL of this page: https://medlineplus.gov/genetics/understanding/therapy/procedures/

How does gene therapy work?

Gene therapy works by altering the genetic code to recover the functions of critical proteins. Proteins are the workhorses of the cell and the structural basis of the body’s tissues. The instructions for making proteins are carried in a person’s genetic code, and variants (or mutations) in this code can impact the production or function of proteins that may be critical to how the body works. Fixing or compensating for disease-causing genetic changes may recover the role of these important proteins and allow the body to function as expected.

Gene therapy can compensate for genetic alterations in a couple different ways.

Genetic material or gene-editing tools that are inserted directly into a cell usually do not function. Instead, a carrier called a vector is genetically engineered to carry and deliver the material. Certain viruses are used as vectors because they can deliver the material by infecting the cell. The viruses are modified so they can't cause disease when used in people. Some types of virus, such as retroviruses, integrate their genetic material (including the new gene) into a chromosome in the human cell. Other viruses, such as adenoviruses, introduce their DNA into the nucleus of the cell, but the DNA is not integrated into a chromosome. Viruses can also deliver the gene-editing tools to the nucleus of the cell.

The vector can be injected or given intravenously (by IV) directly into a specific tissue in the body, where it is taken up by individual cells. Alternately, a sample of the patient's cells can be removed and exposed to the vector in a laboratory setting. The cells containing the vector are then returned to the patient. If the treatment is successful, the new gene delivered by the vector will make a functioning protein or the editing molecules will correct a DNA error and restore protein function.

Gene therapy with viral vectors has been successful, but it does carry some risk. Sometimes the virus triggers a dangerous immune response. In addition, vectors that integrate the genetic material into a chromosome can cause errors that lead to cancer. Researchers are developing newer technologies that can deliver genetic material or gene-editing tools without using viruses. One such technique uses special structures called nanoparticles as vectors to deliver the genetic material or gene-editing components into cells. Nanoparticles are incredibly small structures that have been developed for many uses. For gene therapy, these tiny particles are designed with specific characteristics to target them to particular cell types. Nanoparticles are less likely to cause immune reactions than viral vectors, and they are easier to design and modify for specific purposes.

Researchers continue to work to overcome the many technical challenges of gene therapy. For example, scientists are finding better ways to deliver genes or gene-editing tools and target them to particular cells. They are also working to more precisely control when the treatment is functional in the body.

A new gene is inserted directly into a cell. A carrier called a vector is genetically engineered to deliver the gene. An adenovirus introduces the DNA into the nucleus of the cell, but the DNA is not integrated into a chromosome. 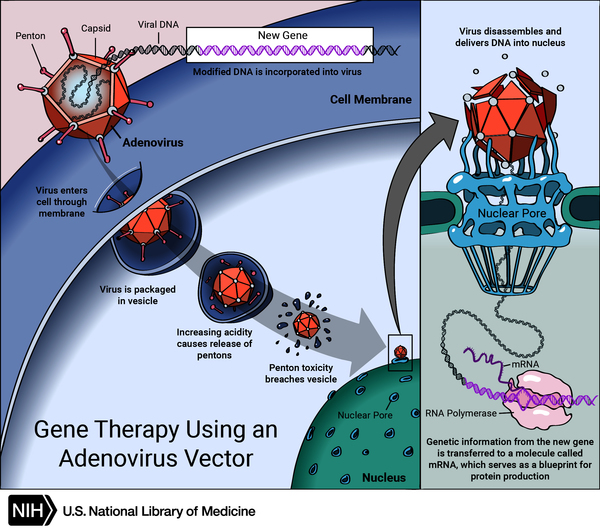 For more information about how gene therapy works:

The Genetic Science Learning Center at the University of Utah provides information about various technical aspects of gene therapy in Gene Delivery: Tools of the Trade. They also discuss other approaches to gene therapy and offer a related learning activity called Space Doctor.

The American Society of Gene and Cell Therapy offers an in-depth description of the different types of viral vectors used in gene therapy.

Penn Medicine's OncoLink describes how gene therapy works and how it is administered to patients.

The basics of nanoparticles and their use in medicine are explained in the Ask a Biologist feature from Arizona State University.

Your Genome from the Wellcome Genome campus explains the first gene therapy trial to treat a condition called severe combined immunodeficiency (SCID). It also describes other applications for gene therapy.

Topics in the Gene Therapy and Other Medical Advances chapter