You Are Here:
Home →
Genetics →
Genetic Conditions →
Vitiligo
URL of this page: https://medlineplus.gov/genetics/condition/vitiligo/

Vitiligo is a condition that causes patchy loss of skin coloring (pigmentation). In addition, hair on these regions of skin can also lose pigment and appear white. The average age of onset of vitiligo is in the mid-twenties, but it can appear at any age. The size and number of patches varies from person to person. The condition tends to progress over time, with larger areas of the skin losing pigment. However, the patches can remain stable or even improve in some affected individuals.

Researchers have identified several forms of vitiligo. Generalized vitiligo (also called nonsegmental vitiligo), which is the most common form, involves loss of pigment (depigmentation) in patches of skin all over the body

. Depigmentation typically occurs on the face, neck, and scalp, and around body openings such as the mouth and genitals. Sometimes pigment is lost in mucous membranes, such as the lips. Loss of pigmentation is also frequently seen in areas that tend to experience rubbing, impact, or other trauma, such as the hands, arms, and places where bones are close to the skin surface (bony prominences). Another form of the condition, called segmental vitiligo, is associated with smaller patches of depigmented skin that appear on one side of the body in a limited area. This form occurs in about 10 percent of affected individuals.

. About 15 to 25 percent of people with vitiligo are also affected by at least one other autoimmune disorder, particularly autoimmune thyroid

In the absence of other autoimmune conditions, vitiligo does not affect general health or physical functioning. However, concerns about appearance and ethnic identity are significant issues for many affected individuals.

Vitiligo is a common disorder, affecting between 0.5 percent and 1 percent of the population worldwide. However, many cases may not be reported, and some researchers suggest the condition may affect up to 1.5 percent of the population. While the condition may be more noticeable in dark-skinned people, it occurs with similar frequency in all ethnic groups.

Variations in over 30 genes, occurring in different combinations, have been associated with an increased risk of developing vitiligo. Two of these genes are NLRP1 and PTPN22. The NLRP1 gene provides instructions for making a protein that is involved in the immune system, helping to regulate the process of inflammation

. Inflammation occurs when the immune system sends signaling molecules and white blood cells to a site of injury or disease to fight microbial invaders and facilitate tissue repair. The body then stops (inhibits) the inflammatory response to prevent damage to its own cells and tissues.

The variations in the NLRP1 and PTPN22 genes that are associated with an increased risk of developing vitiligo likely affect the activity of the NLRP1 and PTPN22 proteins, making it more difficult for the body to control inflammation and prevent the immune system from attacking its own tissues.

Studies indicate that variations in a number of other genes also affect the risk of vitiligo. Many of these genes are also involved in immune system function or melanocyte

The condition probably results from a combination of genetic and environmental factors, many of which have not been identified. Studies suggest that psychological stress, exposure to ultraviolet radiation, or contact with certain chemicals or skin-whitening products may trigger vitiligo in predisposed individuals.

Learn more about the genes associated with Vitiligo

Vitiligo sometimes runs in families, but the inheritance pattern is complex because multiple causative factors are involved. About one-fifth of people with this condition have at least one close relative who is also affected. 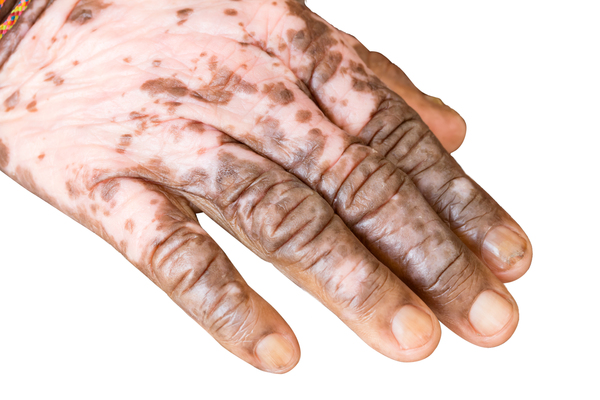