You Are Here:
Home →
Genetics →
Genetic Conditions →
Retinoblastoma
URL of this page: https://medlineplus.gov/genetics/condition/retinoblastoma/

Retinoblastoma is a rare type of eye cancer that usually develops in early childhood, typically before the age of 5. This form of cancer develops in the retina, which is the specialized light-sensitive tissue at the back of the eye

that detects light and color.

. This unusual whiteness is particularly noticeable in dim light or in photographs taken with a flash. Other signs and symptoms of retinoblastoma include crossed eyes or eyes that do not point in the same direction (strabismus

), which can cause squinting; a change in the color of the colored part of the eye (iris); redness, soreness, or swelling of the eyelids; and blindness or poor vision in the affected eye or eyes.

Retinoblastoma is often curable when it is diagnosed early. However, if it is not treated promptly, this cancer can spread beyond the eye to other parts of the body. This advanced form of retinoblastoma can be life-threatening.

When retinoblastoma is associated with a genetic change (mutation) that occurs in all of the body's cells, it is known as hereditary (or germinal) retinoblastoma. People with this form of retinoblastoma typically develop cancer in both eyes and also have an increased risk of developing several other cancers outside the eye. Specifically, they are more likely to develop a cancer of the pineal gland in the brain (pineoblastoma), a type of bone cancer known as osteosarcoma, cancers of soft tissues (such as muscle) called soft tissue sarcomas, and an aggressive form of skin cancer called melanoma.

Retinoblastoma is diagnosed in 250 to 350 children per year in the United States. It accounts for about 4 percent of all cancers in children younger than 15 years.

Mutations in the RB1 gene are responsible for most cases of retinoblastoma. RB1 is a tumor suppressor gene, which means that it normally regulates cell growth and stops cells from dividing too rapidly or in an uncontrolled way. Most mutations in the RB1 gene prevent it from making any functional protein, so cells are unable to regulate cell division effectively. As a result, certain cells in the retina

can divide uncontrollably to form a cancerous tumor

A small percentage of retinoblastomas are caused by deletions

in the region of chromosome 13 that contains the RB1 gene. Because these chromosomal changes involve several genes in addition to RB1, affected children usually also have intellectual disability, slow growth, and distinctive facial features (such as prominent eyebrows, a short nose with a broad nasal bridge, and ear abnormalities).

Learn more about the genes and chromosome associated with Retinoblastoma

Researchers estimate that one-third of all retinoblastomas are hereditary, which means that RB1 gene mutations are present in all of the body's cells, including reproductive cells (sperm or eggs). People with hereditary retinoblastoma may have a family history of the disease, and they are at risk of passing on the mutated RB1 gene to the next generation. The other two-thirds of retinoblastomas are non-hereditary, which means that RB1 gene mutations are present only in cells of the eye and cannot be passed to the next generation.

, or the altered gene may be the result of a new mutation

that occurs in an egg or sperm cell or just after fertilization. For retinoblastoma to develop, a mutation involving the other copy of the RB1 gene must occur in retinal cells

during the person's lifetime. This second mutation usually occurs in childhood, typically leading to the development of retinoblastoma in both eyes. 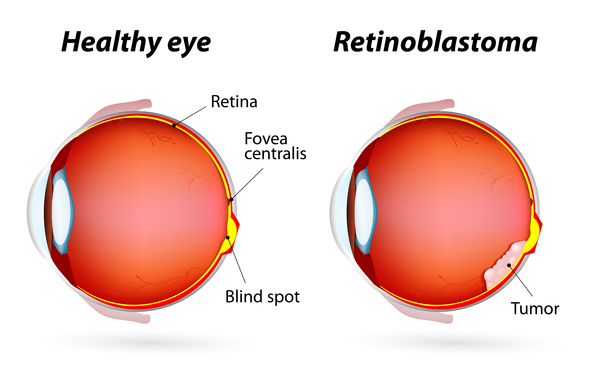