Loeys-Dietz syndrome is a disorder that affects the connective tissue

in many parts of the body. Connective tissue provides strength and flexibility to structures such as bones, ligaments, muscles, and blood vessels.

Loeys-Dietz syndrome is characterized by enlargement of the aorta

, which is the large blood vessel that distributes blood from the heart to the rest of the body. The aorta can weaken and stretch, causing a bulge in the blood vessel wall (an aneurysm

). Stretching of the aorta may also lead to a sudden tearing of the layers in the aorta wall (aortic dissection

). People with Loeys-Dietz syndrome can also have aneurysms or dissections in arteries throughout the body and have arteries with abnormal twists and turns (arterial tortuosity).

), an abnormal side-to-side curvature of the spine (scoliosis

), an inward- and upward-turning foot (clubfoot

), or elongated limbs with joint deformities called contractures that restrict the movement of certain joints. A membrane called the dura, which surrounds the brain and spinal cord, can be abnormally enlarged (dural ectasia). In individuals with Loeys-Dietz syndrome, dural ectasia typically does not cause health problems. Malformation or instability of the spinal bones (vertebrae

) in the neck is a common feature of Loeys-Dietz syndrome and can lead to injuries to the spinal cord. Some affected individuals have joint inflammation (osteoarthritis) that commonly affects the knees and the joints of the hands, wrists, and spine.

may bruise easily and develop abnormal scars after wound healing. The skin is frequently described as translucent, often with stretch marks (striae) and visible underlying veins. Some individuals with Loeys-Dietz syndrome develop an abnormal accumulation of air in the chest cavity that can result in the collapse of a lung (spontaneous pneumothorax) or a protrusion of organs through gaps in muscles (hernias

), eyes that do not point in the same direction (strabismus), a split in the soft flap of tissue that hangs from the back of the mouth (bifid uvula

), and an opening in the roof of the mouth (cleft palate

Mutations in the TGFBR1, TGFBR2, SMAD3, TGFB2, or TGFB3 gene result in the production of a protein with reduced function. Even though the protein is less active, signaling within the TGF-β pathway occurs at an even greater intensity than normal in tissues throughout the body. Researchers speculate that the activity of other proteins in this signaling pathway is increased to compensate for the protein whose function is reduced; however, the exact mechanism responsible for the increase in signaling is unclear. The overactive TGF-β pathway disrupts the development of the extracellular matrix and various body systems, leading to the signs and symptoms of Loeys-Dietz syndrome.

Learn more about the genes associated with Loeys-Dietz syndrome

Loeys-Dietz syndrome has an autosomal dominant pattern of inheritance, which means one copy of the altered gene in each cell is sufficient to cause the disorder.

In about 75 percent of cases, this disorder results from a new gene mutation

and occurs in people with no history of the disorder in their family. In other cases, an affected person inherits the mutation from one affected parent 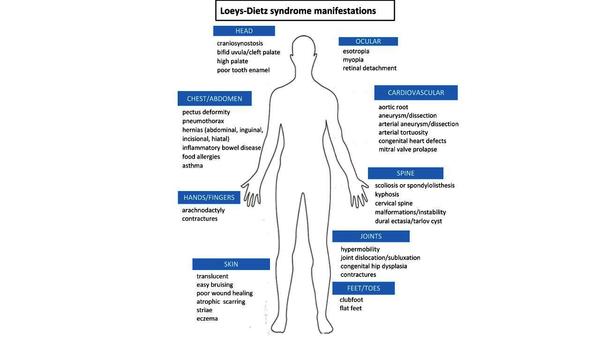