Hereditary cerebral amyloid angiopathy is a condition characterized by an abnormal buildup of protein clumps called amyloid deposits in the blood vessels in the brain, causing vascular disease (angiopathy). People with hereditary cerebral amyloid angiopathy often have progressive loss of intellectual function (dementia), stroke, and other neurological problems starting in mid-adulthood. Due to neurological decline, this condition is typically fatal in one's sixties, although there is variation depending on the severity of the signs and symptoms. Most affected individuals die within a decade after signs and symptoms first appear, although some people with the disease have survived longer.

There are many different types of hereditary cerebral amyloid angiopathy. The different types are distinguished by their genetic cause, which determines whether areas of the brain other than blood vessels are affected, and the signs and symptoms that occur. The various types of hereditary cerebral amyloid angiopathy are named after the regions where they were first diagnosed.

People with the Flemish and Italian types of hereditary cerebral amyloid angiopathy are prone to recurrent strokes and dementia. Individuals with the Piedmont type may have one or more strokes and typically experience impaired movements, numbness or tingling (paresthesias), confusion, or dementia.

The first sign of the Icelandic type of hereditary cerebral amyloid angiopathy is typically a stroke followed by dementia. Strokes associated with the Icelandic type usually occur earlier than the other types, with individuals typically experiencing their first stroke in their twenties or thirties.

Strokes are rare in people with the Arctic type of hereditary cerebral amyloid angiopathy, in which the first sign is usually memory loss that then progresses to severe dementia. Strokes are also uncommon in individuals with the Iowa type. This type is characterized by memory loss, problems with vocabulary and the production of speech, personality changes, and involuntary muscle twitches (myoclonus).

Two types of hereditary cerebral amyloid angiopathy, known as familial British dementia and familial Danish dementia, are characterized by dementia and movement problems. Strokes are uncommon in these types. People with the Danish type also have clouding of the lens of the eyes (cataracts

The prevalence of hereditary cerebral amyloid angiopathy is unknown. The Dutch type is the most common, with over 200 affected individuals reported in the scientific literature.

Variants (also called mutations) in the APP gene are the most common cause of hereditary cerebral amyloid angiopathy. APP gene variants cause the Dutch, Italian, Arctic, Iowa, Flemish, and Piedmont types of this condition. Variants in the CST3 gene cause the Icelandic type. Familial British and Danish dementia are caused by variants in the ITM2B gene.

The APP gene provides instructions for making a protein called amyloid precursor protein. This protein is found in many tissues and organs, including the brain and spinal cord (central nervous system). The precise function of this protein is unknown, but researchers speculate that it may attach (bind) to other proteins on the surface of cells or help cells attach to one another. In the brain, the amyloid precursor protein plays a role in the development and maintenance of nerve cells (neurons).

The CST3 gene provides instructions for making a protein called cystatin C. This protein inhibits the activity of enzymes called cathepsins that cut apart other proteins in order to break them down. Cystatin C is found in biological fluids, such as blood. Its levels are especially high in the fluid that surrounds and protects the brain and spinal cord (the cerebrospinal fluid or CSF

The ITM2B gene provides instructions for producing a protein that is found in all tissues. The function of the ITM2B protein is unclear. It is thought to play a role in triggering the self-destruction of cells (apoptosis

) and keeping cells from growing and dividing too fast or in an uncontrolled way. Additionally, the ITM2B protein may be involved in processing the amyloid precursor protein.

Variants in the APP, CST3, or ITM2B gene lead to the production of proteins that are less stable than normal and that tend to cluster together (aggregate). These aggregated proteins form amyloid deposits that accumulate in certain areas of the brain and in its blood vessels

. The amyloid deposits in the brain damage neurons, eventually causing cell death and impairing various parts of the brain. Brain cell loss in people with hereditary cerebral amyloid angiopathy can lead to seizures, movement abnormalities, and other neurological problems. In blood vessels

, amyloid deposits replace the muscle fibers and elastic fibers that give the blood vessels flexibility, causing them to become weak and prone to breakage. A break in a blood vessel in the brain causes bleeding in the brain (hemorrhagic stroke

), which can lead to brain damage and dementia or be life-threatening.

Hereditary cerebral amyloid angiopathy caused by mutations in the APP, CST3, or ITM2B gene is inherited in an autosomal dominant pattern

There is also a non-hereditary form of cerebral amyloid angiopathy that occurs in people with no history of the disorder in their family. The cause of this form of the condition is unknown. These cases are described as sporadic and are not inherited. 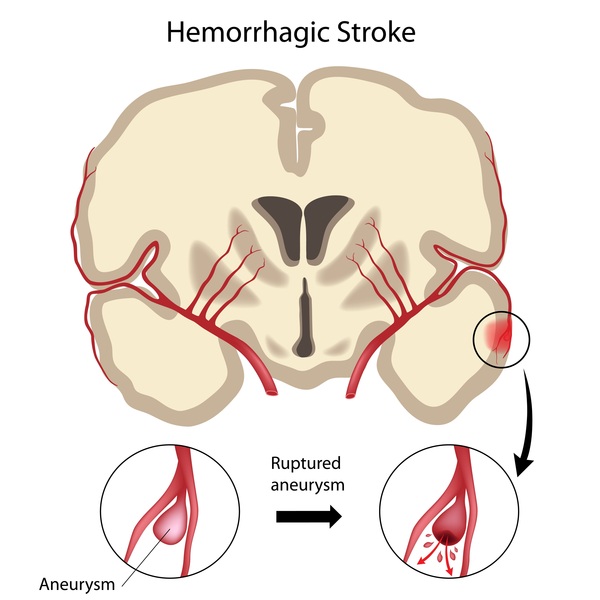