Cold-induced sweating syndrome is characterized by problems with regulating body temperature and other abnormalities affecting many parts of the body. In infancy, the features of this condition are often known as Crisponi syndrome. Researchers originally thought that cold-induced sweating syndrome and Crisponi syndrome were separate disorders, but it is now widely believed that they represent the same condition at different times during life.

Infants with Crisponi syndrome have unusual facial features, including a flat nasal bridge

, upturned nostrils, a long space between the nose and upper lip (philtrum

), a high arched roof of the mouth (palate)

), and low-set ears. The muscles in the lower part of the face are weak, leading to severe feeding difficulties, excessive drooling, and breathing problems. Other physical abnormalities associated with Crisponi syndrome include a scaly skin rash, an inability to fully extend the elbows, overlapping fingers and tightly fisted hands

, and malformations of the feet and toes. Affected infants startle easily and often tense their facial muscles into a grimace-like expression

. By six months of age, infants with Crisponi syndrome develop unexplained high fevers that increase the risk of seizures and sudden death.

Many of the health problems associated with Crisponi syndrome improve with time, and affected individuals who survive the newborn period go on to develop other features of cold-induced sweating syndrome in early childhood. Within the first decade of life, affected individuals begin having episodes of profuse sweating (hyperhidrosis) and shivering involving the face, torso, and arms. The excessive sweating is usually triggered by exposure to temperatures below about 65 or 70 degrees Fahrenheit, but it can also be triggered by nervousness or eating sugary foods. Paradoxically, affected individuals tend not to sweat in warmer conditions, instead becoming flushed and overheated in hot environments.

, often called kyphoscoliosis when they occur together). Although infants may develop life-threatening fevers, affected individuals who survive infancy have a normal life expectancy.

Cold-induced sweating syndrome is a rare condition; its prevalence is unknown. The condition was first identified in the Sardinian population, but it has since been reported in regions worldwide.

The proteins produced from the CRLF1 and CLCF1 genes work together as part of a signaling pathway that is involved in the normal development of the nervous system. This pathway appears to be particularly important for the development and maintenance of motor neurons

, which are nerve cells that control muscle movement. Studies suggest that this pathway also has a role in a part of the nervous system known as the sympathetic nervous system, specifically in the regulation of sweating in response to temperature changes and other factors. The proteins produced from the CRLF1 and CLCF1 genes appear to be critical for the normal development and maturation of nerve cells that control the activity of sweat glands.

Additionally, the CRLF1 and CLCF1 genes likely have functions outside the nervous system, including roles in the body's inflammatory response and in bone development. However, little is known about their involvement in these processes.

Mutations in either the CRLF1 or CLCF1 gene disrupt the normal development of several body systems, including the nervous system. The role of these genes in sympathetic nervous system development may help explain the abnormal sweating that is characteristic of this condition, including unusual sweating patterns and related problems with body temperature regulation. The involvement of these genes in motor neuron development and bone development provides clues to some of the other signs and symptoms of cold-induced sweating syndrome, including distinctive facial features, facial muscle weakness, and skeletal abnormalities. However, little is known about how CRLF1 or CLCF1 gene mutations underlie these other features of cold-induced sweating syndrome.

Learn more about the genes associated with Cold-induced sweating syndrome

Cold-induced sweating syndrome is inherited in an autosomal recessive pattern

, which means both copies of the CRLF1 or CLCF1 gene in each cell have mutations. The parents of an individual with an autosomal recessive condition each carry one copy of the mutated gene, but they typically do not show signs and symptoms of the condition. 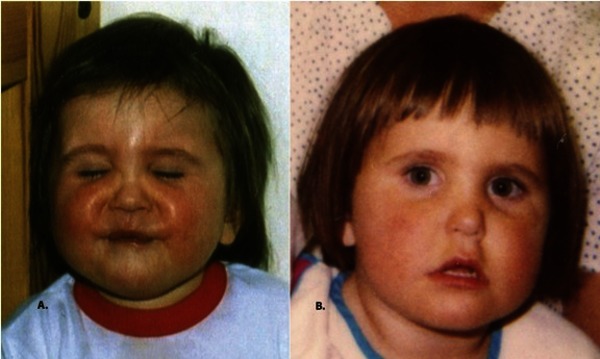