Autosomal dominant optic atrophy and cataract is an eye disorder that is characterized by impaired vision. Most affected individuals have decreased sharpness of vision (visual acuity) from birth, while others begin to experience vision problems in early childhood or later. In affected individuals, both eyes are usually affected equally. However, the severity of the vision loss varies widely, even among affected members of the same family, ranging from nearly normal vision to complete blindness.

Several abnormalities contribute to impaired vision in people with autosomal dominant optic atrophy and cataract. In the early stages of the condition, affected individuals experience a progressive loss of certain cells within the retina

, which is a specialized light-sensitive tissue that lines the back of the eye. The loss of these cells (known as retinal ganglion cells) is followed by the degeneration (atrophy) of the nerves that relay visual information from the eyes to the brain (optic nerves

), which contributes to vision loss. Atrophy of these nerves causes an abnormally pale appearance (pallor) of the optic nerves, which can be seen only during an eye examination. Most people with this disorder also have clouding of the lenses of the eyes (cataracts). This eye abnormality can develop anytime but typically appears in childhood. Other common eye problems in autosomal dominant optic atrophy and cataract include involuntary movements of the eyes (nystagmus), or problems with color vision

(color vision deficiency) that make it difficult or impossible to distinguish between shades of blue and green.

Some people with autosomal dominant optic atrophy and cataract develop disturbances in the function of other nerves (neuropathy) besides the optic nerves. These disturbances can lead to problems with balance and coordination (cerebellar ataxia), an unsteady style of walking (gait), prickling or tingling sensations (paresthesias) in the arms and legs, progressive muscle stiffness (spasticity), or rhythmic shaking (tremors). In some cases, affected individuals have hearing loss caused by abnormalities of the inner ear

Autosomal dominant optic atrophy and cataract is caused by mutations in a gene called OPA3. The protein produced from this gene is made in cells and tissues throughout the body. The OPA3 protein is found within mitochondria

, which are the energy-producing centers of cells. While the exact function of the protein is unknown, it is thought to play a role in the organization of the shape and structure of the mitochondria and in controlled cell death (apoptosis

Mutations in the OPA3 gene lead to abnormal mitochondrial function. The mitochondria become misshapen and disorganized and have reduced energy-producing capabilities. Cells that contain these poorly functioning mitochondria seem to be more susceptible to apoptosis. In particular, affected cells that have high energy demands, such as retinal ganglion cells

, form the optic nerves, so when retinal ganglion cells die, the optic nerves atrophy and cannot transmit visual information to the brain. Together, these effects reduce vision in affected individuals. It is likely that nerve cells in other parts of the body are similarly affected by dysfunctional mitochondria, resulting in the signs and symptoms of neuropathy in individuals with autosomal dominant optic atrophy and cataract. It is unclear how OPA3 gene mutations lead to cataracts and other eye problems that can occur in autosomal dominant optic atrophy and cataracts.

In most cases, an affected person has one parent with the condition. 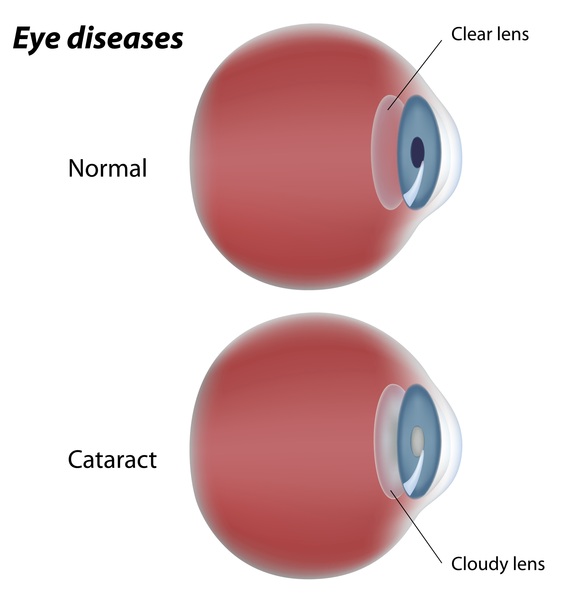