). Blue cone monochromacy is sometimes considered to be a form of achromatopsia, a disorder characterized by a partial or total lack of color vision with other vision problems.

Mutations in the OPN1LW, OPN1MW, and OPN1SW genes cause the forms of color vision deficiency described above. The proteins produced from these genes play essential roles in color vision. They are found in the retina

, which is the light-sensitive tissue at the back of the eye

, that transmit visual signals from the eye to the brain. Rods provide vision in low light. Cones provide vision in bright light, including color vision. There are three types of cones, each containing a specific pigment (a photopigment called an opsin) that is most sensitive to particular wavelengths of light. The brain combines input from all three types of cones to produce normal color vision.

Genetic changes involving the OPN1LW or OPN1MW gene cause red-green color vision defects. These changes lead to an absence of L or M cones or to the production of abnormal opsin pigments in these cones that affect red-green color vision. Blue-yellow color vision defects result from mutations in the OPN1SW gene. These mutations lead to the premature destruction of S cones or the production of defective S cones. Impaired S cone function alters perception of the color blue, making it difficult or impossible to detect differences between shades of blue and green and causing problems with distinguishing dark blue from black.

Blue cone monochromacy occurs when genetic changes affecting the OPN1LW and OPN1MW genes prevent both L and M cones from functioning normally. In people with this condition, only S cones are functional, which leads to reduced visual acuity and poor color vision. The loss of L and M cone function also underlies the other vision problems in people with blue cone monochromacy.

Some problems with color vision are not caused by gene mutations. These nonhereditary conditions are described as acquired color vision deficiencies. They can be caused by other eye disorders, such as diseases involving the retina, the nerve that carries visual information from the eye to the brain (the optic nerve), or areas of the brain involved in processing visual information. Acquired color vision deficiencies can also be side effects of certain drugs, such as chloroquine (which is used to treat malaria), or result from exposure to particular chemicals, such as organic solvents.

Learn more about the genes associated with Color vision deficiency

. The OPN1LW and OPN1MW genes are located on the X chromosome, which is one of the two sex chromosomes

. In males (who have only one X chromosome), one genetic change in each cell is sufficient to cause the condition. Males are affected by X-linked recessive disorders much more frequently than females because in females (who have two X chromosomes), a genetic change would have to occur on both copies of the chromosome to cause the disorder. A characteristic of X-linked inheritance is that fathers cannot pass X-linked traits to their sons. 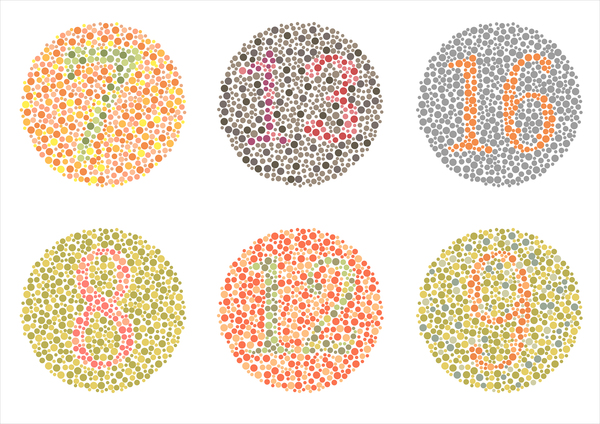