Alopecia areata is a common disorder that causes hair loss. "Alopecia" is a Latin term that means baldness, and "areata" refers to the patchy nature of the hair loss that is typically seen with this condition.

In most people with alopecia areata, hair falls out in small, round patches, leaving coin-sized areas of bare skin. This patchy hair loss occurs most often on the scalp but can affect other parts of the body as well. Uncommonly, the hair loss involves the entire scalp (in which case the condition is known as alopecia totalis) or the whole body (alopecia universalis). Other rare forms of alopecia areata, which have different patterns of hair loss, have also been reported.

Alopecia areata affects people of all ages, although it most commonly appears in adolescence or early adulthood. Hair loss occurs over a period of weeks. The hair usually grows back after several months, although it may fall out again. In some cases, unpredictable cycles of hair loss followed by regrowth can last for years. In addition to hair loss, some affected individuals have fingernail and toenail abnormalities, such as pits on the surface of the nails

The hair loss associated with alopecia areata is not painful or disabling. However, it causes changes in a person's appearance that can profoundly affect quality of life and self-esteem. In some people, the condition can lead to depression, anxiety, and other emotional or psychological issues.

The causes of alopecia areata are complex and not well understood. A combination of factors likely underlies the disorder, including changes in many genes that function in the hair and skin and in the immune system.

, stopping hair growth. However, the condition does not permanently damage the follicles, which is why hair may later regrow.

Many of the genes that have been associated with alopecia areata participate in the body's immune response. These include several genes belonging to a gene family called the human leukocyte antigen (HLA) complex

. The HLA complex helps the immune system distinguish the body's own proteins from proteins made by foreign invaders. Each HLA gene has many different variations, allowing each person's immune system to react to a wide range of foreign proteins. Certain variations in HLA genes likely contribute to the inappropriate immune response targeting hair follicles that leads to alopecia areata. Immune system genes outside the HLA complex, such as several genes involved in inflammation, have also been associated with alopecia areata.

In many cases, it is unknown what triggers hair loss in people with alopecia areata. It is possible that environmental factors, such as emotional stress, physical injury, or illness, provoke an abnormal immune response in people who are at risk. However, in most affected people, the onset of hair loss has no clear explanation.

Learn more about the genes associated with Alopecia areata

The inheritance pattern of alopecia areata is unclear because multiple genetic and environmental factors appear to be involved. Overall, the risk of developing the condition is greater for first-degree relatives

(such as siblings or children) of affected individuals than it is in the general population. People with alopecia areata are also more likely to have family members with other autoimmune disorders. 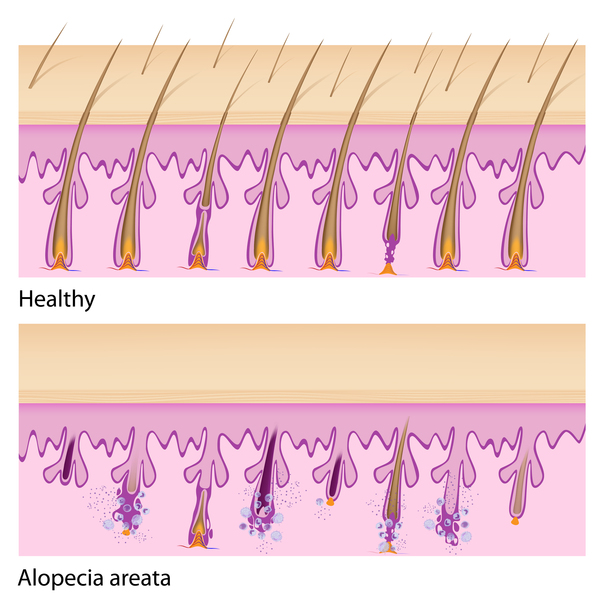