Smith-Magenis syndrome is a developmental disorder that affects many parts of the body. The major features of this condition include mild to moderate intellectual disability, delayed speech and language skills, distinctive facial features, sleep disturbances, and behavioral problems.

Most people with Smith-Magenis syndrome have a broad, square-shaped face with deep-set eyes, full cheeks, and a prominent lower jaw. The middle of the face and the bridge of the nose often appear flattened. The mouth tends to turn downward with a full, outward-curving upper lip. These facial differences can be subtle in early childhood

, but they usually become more distinctive in later childhood and adulthood. Dental abnormalities are also common in affected individuals.

Disrupted sleep patterns are characteristic of Smith-Magenis syndrome, typically beginning early in life. Affected people may be very sleepy during the day, but they have trouble falling asleep at night and awaken several times during the night and early morning.

People with Smith-Magenis syndrome typically have affectionate, engaging personalities, but most also have behavioral problems. These include frequent temper tantrums and outbursts, aggression, anxiety, impulsiveness, and difficulty paying attention. Self-injury, including biting, hitting, head banging, and skin picking, is very common. Repetitive self-hugging is a behavioral trait that may be unique to Smith-Magenis syndrome. Some people with this condition also compulsively lick their fingers and flip pages of books and magazines (a behavior known as "lick and flip").

Other signs and symptoms of Smith-Magenis syndrome include short stature, abnormal curvature of the spine (scoliosis

), reduced sensitivity to pain and temperature, and a hoarse voice. Some people with this disorder have ear abnormalities that lead to hearing loss. Affected individuals may have eye abnormalities that cause nearsightedness (myopia

) and other vision problems. Although less common, heart and kidney defects also have been reported in people with Smith-Magenis syndrome.

Smith-Magenis syndrome affects at least 1 in 25,000 individuals worldwide. However, researchers believe that many people with this condition are not diagnosed, so the true prevalence may be closer to 1 in 15,000 individuals.

In most people with Smith-Magenis syndrome, the condition results from the deletion

of a small piece of chromosome 17 in each cell. This deletion occurs on the short (p) arm of the chromosome at a position designated p11.2. The deleted segment most often includes approximately 3.7 million DNA building blocks (base pairs), also written as 3.7 megabases (Mb). (An extra copy

of this segment causes a related condition called Potocki-Lupski syndrome.) Occasionally the deletion is larger or smaller. All of the deletions affect one of the two copies of chromosome 17 in each cell.

Although the deleted region contains multiple genes, researchers believe that the loss of one particular gene, RAI1, underlies many of the characteristic features of Smith-Magenis syndrome. All of the deletions known to cause the condition contain this gene. The RAI1 gene provides instructions for making a protein that helps regulate the activity (expression) of other genes. Although most of the genes regulated by the RAI1 protein have not been identified, this protein appears to control the expression of several genes involved in daily (circadian) rhythms, such as the sleep-wake cycle. Studies suggest that the deletion leads to a reduced amount of RAI1 protein in cells, which disrupts the expression of genes that influence circadian rhythms. These changes may account for the sleep disturbances that occur with Smith-Magenis syndrome. It is unclear how a loss of one copy of the RAI1 gene leads to the other physical, mental, and behavioral problems associated with this condition.

A small percentage of people with Smith-Magenis syndrome have a mutation in the RAI1 gene instead of a chromosomal deletion. Although these individuals have many of the major features of the condition, they are less likely than people with a deletion to have short stature, hearing loss, and heart or kidney abnormalities. It is likely that, in people with a deletion, the loss of other genes in the deleted region accounts for these additional signs and symptoms; the role of these genes is under study.

In a small number of cases, people with Smith-Magenis syndrome have inherited the deletion or mutation from an unaffected mother who had the genetic change only in her egg cells. This phenomenon is called germline mosaicism. 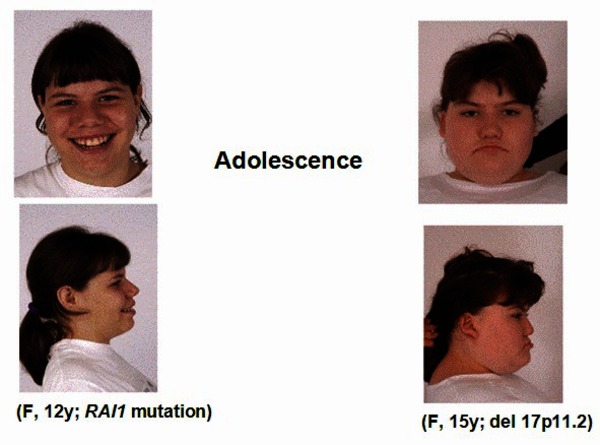