Oculocutaneous albinism is a group of conditions that affect coloring (pigmentation) of the skin, hair, and eyes. Affected individuals typically have very fair skin and white or light-colored hair. Long-term sun exposure

greatly increases the risk of skin damage and skin cancers, including an aggressive form of skin cancer called melanoma, in people with this condition. Oculocutaneous albinism also reduces pigmentation of the colored part of the eye

(the iris) and the light-sensitive tissue at the back of the eye (the retina). People with this condition usually have vision problems such as reduced sharpness; rapid, involuntary eye movements (nystagmus); and increased sensitivity to light (photophobia).

Several additional types of this disorder have been proposed, each affecting one or a few families.

Overall, an estimated 1 in 20,000 people worldwide are born with oculocutaneous albinism. The condition affects people in many ethnic groups and geographical regions. Types 1 and 2 are the most common forms of this condition; types 3 and 4 are less common. Type 2 occurs more frequently in African Americans, some Native American groups, and people from sub-Saharan Africa. Type 3, specifically rufous oculocutaneous albinism, has been described primarily in people from southern Africa. Studies suggest that type 4 occurs more frequently in the Japanese and Korean populations than in people from other parts of the world.

Oculocutaneous albinism can result from mutations in several genes, including TYR, OCA2, TYRP1, and SLC45A2. Changes in the TYR gene cause type 1; mutations in the OCA2 gene are responsible for type 2; TYRP1 mutations cause type 3; and changes in the SLC45A2 gene result in type 4. Mutations in additional genes likely underlie the other forms of this disorder. The genes associated with oculocutaneous albinism are involved in producing a pigment called melanin

, which is the substance that gives skin

, hair, and eyes their color. In the retina, melanin also plays a role in normal vision. Mutations in any of these genes disrupt the ability of cells to make melanin, which reduces pigmentation in the skin, hair, and eyes. A lack of melanin in the retina leads to the vision problems characteristic of oculocutaneous albinism.

Alterations in the MC1R gene can change the appearance of people with oculocutaneous albinism type 2. This gene helps regulate melanin production and is responsible for some normal variation in pigmentation. People with genetic changes in both the OCA2 and MC1R genes have many of the usual features of oculocutaneous albinism type 2, including light-colored eyes and vision problems; however, they typically have red hair instead of the usual yellow, blond, or light brown hair seen with this condition.

Some individuals with oculocutaneous albinism do not have mutations in any of the known genes. In these people, the genetic cause of the condition is unknown.

Learn more about the genes associated with Oculocutaneous albinism

Oculocutaneous albinism is inherited in an autosomal recessive pattern

, which means both copies of a gene in each cell have mutations. Most often, the parents of an individual with an autosomal recessive condition each carry one copy of the mutated gene, but they do not show signs and symptoms of the condition. 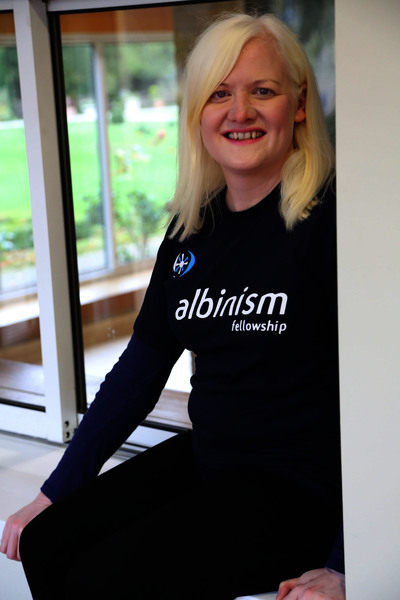