Multiple myeloma is a cancer that develops in the bone marrow

, the spongy tissue found in the center of most bones. The bone marrow produces red blood cells, which carry oxygen throughout the body; white blood cells, which form the body's defenses (immune system); and platelets, which are necessary for blood clotting

Multiple myeloma is characterized by abnormalities in plasma cells, a type of white blood cell. These abnormal cells multiply out of control, increasing from about one percent of cells in the bone marrow to the majority of bone marrow cells. The abnormal cells form tumors within the bone, causing bone pain and an increased risk of fractures. If the tumors interfere with nerves near the bones, numbness or weakness in the arms or legs can occur. Affected individuals may also experience a loss of bone tissue, particularly in the skull, spine, ribs, and pelvis. The deterioration of bone can result in an excess of calcium in the blood (hypercalcemia), which can lead to nausea and loss of appetite, excessive thirst, fatigue, muscle weakness, and confusion.

. As a result, affected individuals may have a reduced number of red blood cells (anemia

), which can cause fatigue, weakness, and unusually pale skin (pallor); a low number of white blood cells (leukopenia), which can result in a weakened immune system and frequent infections such as pneumonia; and a reduced number of platelets (thrombocytopenia), which can lead to abnormal bleeding and bruising. Kidney problems can also occur in this disorder, caused by hypercalcemia or by toxic proteins produced by the abnormal plasma cells.

People with multiple myeloma typically develop the disorder around age 65. Over time, affected individuals can develop life-threatening complications, but the rate at which this happens varies widely. Some affected individuals are diagnosed incidentally when tests are done for other purposes and do not experience symptoms for years.

Multiple myeloma is considered a rare cancer; it accounts for about 10 percent of cancers of the blood and blood-forming tissues, and between one and two percent of all cancers. Multiple myeloma occurs in approximately 4 per 100,000 people per year; there are currently about 100,000 affected individuals in the United States.

The cause of multiple myeloma is unclear. Somatic mutations, which are genetic changes that are not inherited but occur during an individual's lifetime in certain cells (in this case the plasma cells), have been identified in people with multiple myeloma. Some of these changes affect genes that play a critical role in regulating cell division by preventing cells from dividing too rapidly or in an uncontrolled way

. Mutations in these genes may interfere with proper control (regulation) of cell growth and division (proliferation), resulting in the excessive proliferation of plasma cells that characterizes multiple myeloma.

) are common somatic events in multiple myeloma. The translocations most often involve an exchange between chromosome 14 and another chromosome. Genes that control cell growth and division are likely affected by these translocations. Researchers are working to determine what role these genetic and chromosomal changes play in the development and progression of multiple myeloma.

Nongenetic factors that increase the risk of developing multiple myeloma include previous radiation therapy or other radiation exposure. Exposure to certain chemicals including benzene has also been found to increase myeloma risk. Benzene, a known carcinogen, is a petroleum product widely used as an industrial solvent and a gasoline additive.

Learn more about the genes and chromosome associated with Multiple myeloma

This condition is generally not inherited but arises from somatic mutations in plasma cells. An increased risk of developing multiple myeloma seems to run in some families, but the inheritance pattern is unknown. 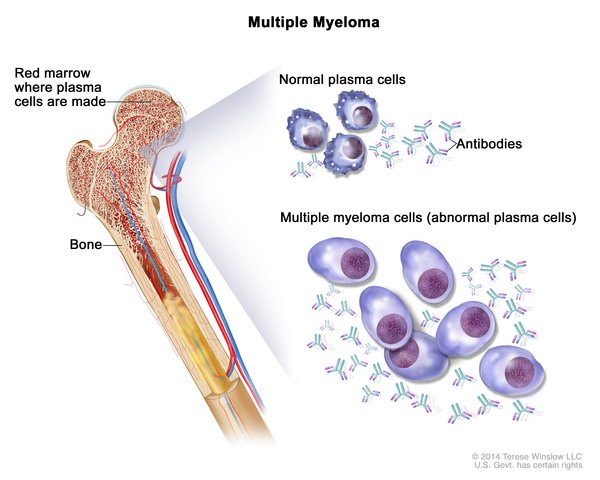