Mandibulofacial dysostosis with microcephaly (MFDM) is a disorder that causes abnormalities of the head and face. People with this disorder often have an unusually small head

at birth, and the head does not grow at the same rate as the rest of the body, so it appears that the head is getting smaller as the body grows (progressive microcephaly). Affected individuals have developmental delay and intellectual disability that can range from mild to severe. Speech and language problems are also common in this disorder.

Facial abnormalities that occur in MFDM include underdevelopment of the middle of the face and the cheekbones (midface and malar hypoplasia) and an unusually small lower jaw (mandibular hypoplasia, also called micrognathia). The external ears are small and abnormally shaped

, and they may have skin growths in front of them called preauricular tags. There may also be abnormalities of the ear canal, the tiny bones in the ears (ossicles), or a part of the inner ear called the semicircular canals. These ear abnormalities lead to hearing loss in most affected individuals. Some people with MFDM have an opening in the roof of the mouth (cleft palate

), which may also contribute to hearing loss by increasing the risk of ear infections. Affected individuals can also have a blockage of the nasal passages (choanal atresia) that can cause respiratory problems.

Heart problems, abnormalities of the thumbs, and short stature are other features that can occur in MFDM. Some people with this disorder also have blockage of the esophagus (esophageal atresia

MFDM is a rare disorder; its exact prevalence is unknown. More than 60 affected individuals have been described in the medical literature.

MFDM is caused by mutations in the EFTUD2 gene. This gene provides instructions for making one part (subunit) of two complexes called the major and minor spliceosomes. Spliceosomes help process messenger RNA (mRNA), which is a chemical cousin of DNA that serves as a genetic blueprint for making proteins. The spliceosomes recognize and then remove regions called introns to help produce mature mRNA molecules.

EFTUD2 gene mutations that cause MFDM result in the production of little or no functional enzyme from one copy of the gene in each cell. A shortage of this enzyme likely impairs mRNA processing. The relationship between these mutations and the specific symptoms of MFDM is not well understood.

Learn more about the gene associated with Mandibulofacial dysostosis with microcephaly

This condition is inherited in an autosomal dominant pattern, which means one copy of the altered gene in each cell is sufficient to cause the disorder. Most cases result from new mutations in the gene

and occur in people with no history of the disorder in their family. In other cases, an affected person inherits the mutation from a parent

. The parent may be mildly affected or may be unaffected. Sometimes the parent has the gene mutation only in some or all of their sperm or egg cells, which is known as germline mosaicism. In these cases, the parent has no signs or symptoms of the condition. 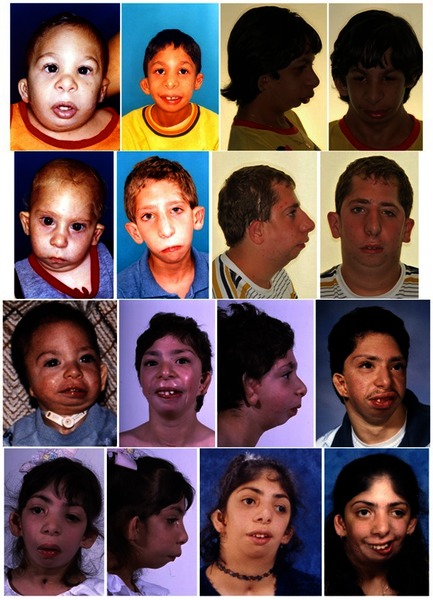