). During early development, the esophagus and windpipe (trachea

) begin as a single tube that normally divides into the two adjacent passages between four and eight weeks after conception. If this separation does not occur properly, EA/TEF is the result.

and interfere with breathing. A small number of infants have only one of these abnormalities.

There are several types of EA/TEF

While EA/TEF arises during fetal development, it generally becomes apparent shortly after birth. Saliva, liquids fed to the infant, or digestive fluids may enter the windpipe through the tracheoesophageal fistula, leading to coughing, respiratory distress, and a bluish appearance of the skin or lips (cyanosis). Esophageal atresia blocks liquids fed to the infant from entering the stomach, so they are spit back up, sometimes along with fluids from the respiratory tract. EA/TEF is a life-threatening condition; affected babies generally require surgery to correct the malformation in order to allow feeding and prevent lung damage from repeated exposure to esophageal fluids.

EA/TEF occurs alone (isolated EA/TEF) in about 40 percent of affected individuals. In other cases it occurs with other birth defects or as part of a genetic syndrome (non-isolated or syndromic EA/TEF).

Non-isolated or syndromic forms of EA/TEF can be caused by changes in single genes or in chromosomes, or they can be multifactorial. For example, approximately 10 percent of people with CHARGE syndrome, which is usually caused by mutations in the CHD7 gene, have EA/TEF. About 25 percent of individuals with the chromosomal abnormality trisomy 18 are born with EA/TEF. EA/TEF also occurs in VACTERL association, a multifactorial condition. VACTERL is an acronym that stands for vertebral defects, anal atresia, cardiac defects, tracheoesophageal fistula, renal anomalies, and limb abnormalities. People diagnosed with VACTERL association typically have at least three of these features; between 50 and 80 percent have a tracheoesophageal fistula.

When EA/TEF occurs as a feature of a genetic syndrome or chromosomal abnormality, it may cluster in families according to the inheritance pattern for that condition. Often EA/TEF is not inherited, and there is only one affected individual in a family. 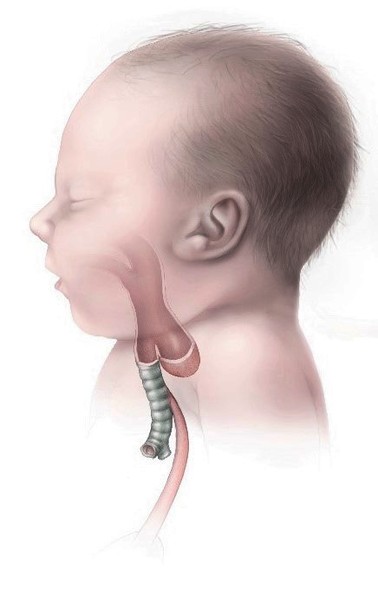