CHARGE syndrome is a disorder that affects many areas of the body. CHARGE is an abbreviation for several of the features common in the disorder: coloboma, heart defects, atresia choanae (also known as choanal atresia), growth retardation, genital abnormalities, and ear abnormalities. The pattern of malformations varies among individuals with this disorder, and the multiple health problems can be life-threatening in infancy. Affected individuals usually have several major characteristics or a combination of major and minor characteristics.

The major characteristics of CHARGE syndrome are common in this disorder and occur less frequently in other disorders. Most individuals with CHARGE syndrome have a gap or hole in one of the structures of the eye (coloboma), which forms during early development. A coloboma may be present in one or both eyes and may impair a person's vision, depending on its size and location. Some affected individuals also have abnormally small or underdeveloped eyes (microphthalmia). In many people with CHARGE syndrome, one or both nasal passages are narrowed (choanal stenosis) or completely blocked (choanal atresia), which can cause difficulty breathing. Affected individuals frequently have cranial nerve

abnormalities. The cranial nerves emerge directly from the brain and extend to various areas of the head and neck, controlling muscle movement and transmitting sensory information. Abnormal function of certain cranial nerves can cause swallowing problems, facial paralysis, a sense of smell that is diminished (hyposmia) or completely absent (anosmia), and mild to profound hearing loss. People with CHARGE syndrome also typically have middle and inner ear

abnormalities, which can contribute to hearing problems, and unusually shaped external ears

While the minor characteristics of CHARGE syndrome are common in this disorder, they are also frequently present in people without the disorder. The minor characteristics include heart defects; slow growth starting in late infancy; delayed development of motor skills, such as sitting unsupported and walking; and an opening in the lip (cleft lip

). Affected individuals frequently have hypogonadotropic hypogonadism, which affects the production of hormones that direct sexual development. As a result, males with CHARGE syndrome are often born with an unusually small penis (micropenis) and undescended testes (cryptorchidism). Abnormalities of external genitalia are seen less often in affected females. Puberty can be incomplete or delayed in affected males and females. Another minor feature of CHARGE syndrome is tracheoesophageal fistula, which is an abnormal connection (fistula) between the esophagus and the trachea. Most people with CHARGE syndrome also have distinctive facial features, including a square-shaped face and differences in appearance between the right and left sides of the face (facial asymmetry). Affected individuals have a wide range of cognitive function, from normal intelligence to major learning disabilities with absent speech and poor communication.

); and limb abnormalities, such as extra fingers or toes (polydactyly

), and abnormalities of the long bones of the arms and legs.

Mutations in the CHD7 gene cause most cases of CHARGE syndrome. The CHD7 gene provides instructions for making a protein that regulates gene activity (expression) by a process known as chromatin remodeling. Chromatin

is the complex of DNA and protein that packages DNA into chromosomes. The structure of chromatin can be changed (remodeled) to alter how tightly DNA is packaged. When DNA is tightly packed, gene expression is lower than when DNA is loosely packed. Chromatin remodeling is one way gene expression is regulated during development.

Most mutations in the CHD7 gene lead to the production of an abnormal CHD7 protein that is broken down prematurely. Shortage of this protein is thought to disrupt chromatin remodeling and the regulation of gene expression. Changes in gene expression during embryonic development likely cause the signs and symptoms of CHARGE syndrome.

Learn more about the gene associated with CHARGE syndrome

When CHARGE syndrome is caused by mutations in the CHD7 gene, it follows an autosomal dominant pattern of inheritance, which means one copy of the altered gene in each cell is sufficient to cause the disorder. Most cases result from new mutations

in the gene and occur in people with no history of the disorder in their family. In rare cases, an affected person inherits

the mutation from an affected parent. The inheritance pattern of other cases of CHARGE syndrome is unknown. 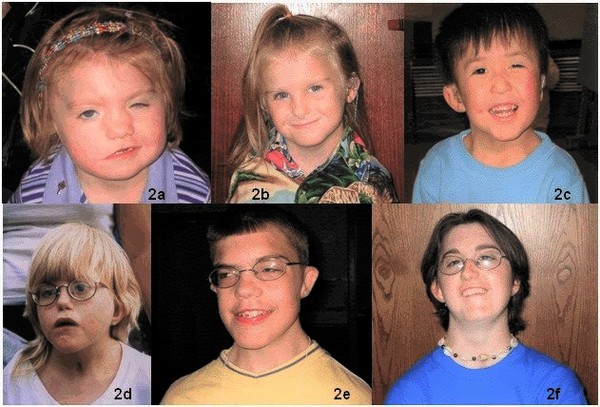