. Lung cancer may not cause signs or symptoms in its early stages. Some people with lung cancer have chest pain, frequent coughing, blood in the mucus, breathing problems, trouble swallowing or speaking, loss of appetite and weight loss, fatigue, or swelling in the face or neck. Additional symptoms can develop if the cancer spreads (metastasizes

) into other tissues. Lung cancer occurs most often in adults in their sixties or seventies. Most people who develop lung cancer have a history of long-term tobacco smoking; however, the condition can occur in people who have never smoked.

by the time the condition is diagnosed. Small cell lung cancer often metastasizes, most commonly to the liver, brain, bones, and adrenal glands

(small hormone-producing glands located on top of each kidney). After diagnosis, most people with small cell lung cancer survive for about 1 year; less than seven percent survive 5 years.

) located throughout the lungs. Squamous cell carcinoma arises from squamous cells that line the passages leading from the windpipe (trachea

Cancers occur when genetic mutations build up in critical genes, specifically those that control cell growth and division (proliferation) or the repair of damaged DNA. These changes allow cells to grow and divide uncontrollably to form a tumor

. In nearly all cases of lung cancer, these genetic changes are acquired during a person's lifetime and are present only in certain cells in the lung. These changes, which are called somatic mutations, are not inherited. Somatic mutations in many different genes have been found in lung cancer cells. In rare cases, the genetic change is inherited and is present in all the body's cells (germline mutations).

Somatic mutations in the TP53, EGFR, and KRAS genes are common in lung cancers. The TP53 gene provides instructions for making a protein, called p53, that is located in the nucleus of cells throughout the body, where it attaches (binds) directly to DNA. The protein regulates cell growth and division by monitoring DNA damage. When DNA becomes damaged, p53 helps determine whether the DNA will be repaired or the cell will self-destruct (undergo apoptosis

). The EGFR and KRAS genes each provide instructions for making a protein that is embedded within the cell membrane. When these proteins are turned on (activated) by binding to other molecules, signaling pathways are triggered within cells that promote cell proliferation.

TP53 gene mutations result in the production of an altered p53 protein that cannot bind to DNA. The altered protein cannot regulate cell proliferation effectively and allows DNA damage to accumulate in cells. Such cells may continue to divide in an uncontrolled way, leading to tumor growth. Mutations in the EGFR or KRAS gene lead to the production of a protein that is constantly turned on (constitutively activated). As a result, cells constantly receive signals to proliferate, leading to tumor formation. When these genetic changes occur in cells in the lungs

Mutations in many other genes have been found to recur in lung cancer cases. Most of these genes are involved in the regulation of gene activity (expression), cell proliferation, the process by which cells mature to carry out specific functions (differentiation), and apoptosis.

Researchers have identified many lifestyle and environmental factors that expose individuals to cancer-causing compounds (carcinogens) and increase the rate at which somatic mutations occur, contributing to a person's risk of developing lung cancer. The greatest risk factor is long-term tobacco smoking, which increases a person's risk of developing lung cancer 25-fold. Other risk factors include exposure to air pollution, radon, asbestos, certain metals and chemicals, or secondhand smoke; long-term use of hormone replacement therapy for menopause; and a history of lung disease such as tuberculosis, emphysema, or chronic bronchitis. A history of lung cancer in closely related family members is also an important risk factor; however, because relatives with lung cancer are frequently smokers, it is unclear whether the increased risk is the result of genetic factors or exposure to secondhand smoke.

Learn more about the genes associated with Lung cancer

Most cases of lung cancer are not related to inherited genetic changes. These cancers are associated with somatic mutations that occur only in certain cells in the lung.

, which means one copy of the altered gene in each cell is sufficient to increase a person's chance of developing the disease. It is important to note that people inherit an increased risk of cancer, not the disease itself. Not all people who inherit mutations in these genes will develop lung cancer. 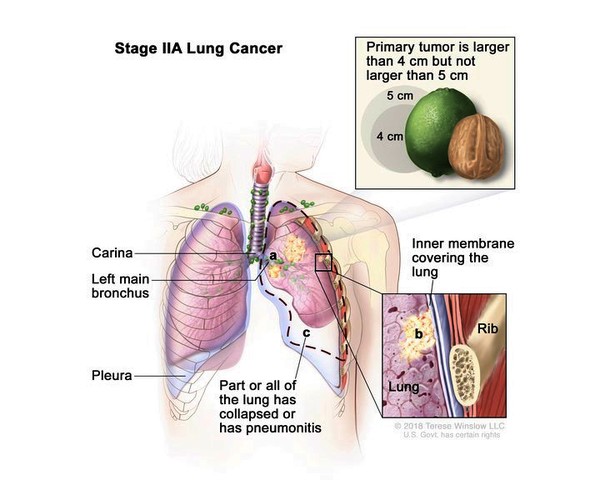