You Are Here:
Home →
Genetics →
Genetic Conditions →
Homocystinuria
URL of this page: https://medlineplus.gov/genetics/condition/homocystinuria/

) properly. There are multiple forms of homocystinuria, which are distinguished by their signs and symptoms and genetic cause. The most common form of homocystinuria is characterized by nearsightedness (myopia

), dislocation of the lens

at the front of the eye, an increased risk of abnormal blood clotting, and brittle bones that are prone to fracture (osteoporosis

) or other skeletal abnormalities. Some affected individuals also have developmental delay and learning problems.

Less common forms of homocystinuria can cause intellectual disability, failure to grow and gain weight at the expected rate (failure to thrive), seizures, problems with movement, and a blood disorder called megaloblastic anemia

The signs and symptoms of homocystinuria typically develop within the first year of life, although some mildly affected people may not develop features until later in childhood or adulthood.

Mutations in the CBS, MTHFR, MTR, MTRR, and MMADHC genes cause homocystinuria.

Mutations in the CBS gene cause the most common form of homocystinuria. The CBS gene provides instructions for producing an enzyme called cystathionine beta-synthase. This enzyme acts in a chemical pathway and is responsible for converting the amino acid

homocysteine to a molecule called cystathionine. As a result of this pathway, other amino acids, including methionine, are produced. Mutations in the CBS gene disrupt the function of cystathionine beta-synthase, preventing homocysteine from being used properly. As a result, this amino acid and toxic byproducts substances build up in the blood. Some of the excess homocysteine is excreted in urine.

Rarely, homocystinuria can be caused by mutations in several other genes. The enzymes made by the MTHFR, MTR, MTRR, and MMADHC genes play roles in converting homocysteine to methionine. Mutations in any of these genes prevent the enzymes from functioning properly, which leads to a buildup of homocysteine in the body. Researchers have not determined how excess homocysteine and related compounds lead to the signs and symptoms of homocystinuria.

Learn more about the genes associated with Homocystinuria

, which means both copies of the gene in each cell have mutations. Most often, the parents of an individual with an autosomal recessive condition each carry one copy of the mutated gene, but do not show signs and symptoms of the condition.

Although people who carry one mutated copy and one normal copy of the CBS gene do not have homocystinuria, they are more likely than people without a CBS mutation to have shortages (deficiencies) of vitamin B12 and folic acid. 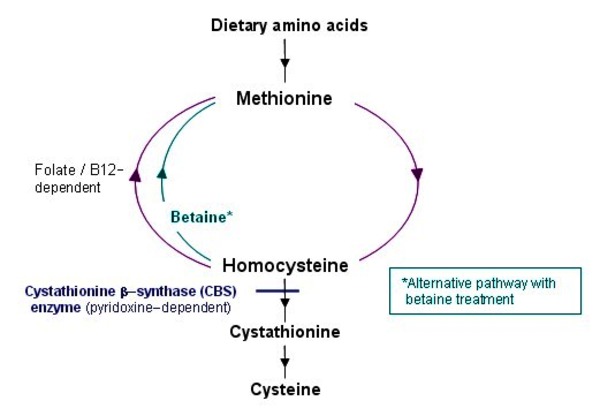