Hereditary hemochromatosis is a disorder that causes the body to absorb too much iron from the diet. The excess iron is stored in the body's tissues and organs, particularly the skin, heart, liver

, and joints. Because humans cannot increase the excretion of iron, excess iron can overload and eventually damage tissues and organs. For this reason, hereditary hemochromatosis is also called an iron overload disorder.

Early symptoms of hereditary hemochromatosis may include extreme tiredness (fatigue), joint pain, abdominal pain, weight loss, and loss of sex drive. As the condition worsens, affected individuals may develop arthritis, liver disease (cirrhosis) or liver cancer, diabetes, heart abnormalities, or skin discoloration. The appearance and severity of symptoms can be affected by environmental and lifestyle factors such as the amount of iron in the diet, alcohol use, and infections.

There are four types of hereditary hemochromatosis, which are classified depending on the age of onset and other factors such as genetic cause and mode of inheritance.

The onset of type 3 hemochromatosis is usually intermediate between types 1 and 2 with symptoms generally beginning before age 30.

Type 1 hemochromatosis is one of the most common genetic disorders in the United States, affecting about 1 million people. It most often affects people of Northern European descent. The other types of hemochromatosis are considered rare and have been studied in only a small number of families worldwide.

The proteins produced from these genes play important roles in regulating the absorption, transport, and storage of iron in the body. Mutations in any of these genes impair the control of the intestine's absorption of iron from foods during digestion and alter the distribution of iron to other parts of the body. As a result, iron accumulates in tissues and organs, which can disrupt their normal functions.

Learn more about the genes associated with Hereditary hemochromatosis

Types 1, 2, and 3 hemochromatosis are inherited in an autosomal recessive pattern

, which means both copies of the gene in each cell have mutations. Most often, the parents of an individual with an autosomal recessive condition each carry one copy of the mutated gene but do not show signs and symptoms of the condition.

Type 4 hemochromatosis is distinguished by its autosomal dominant inheritance pattern

. With this type of inheritance, one copy of the altered gene in each cell is sufficient to cause the disorder. In most cases, an affected person has one parent with the condition. 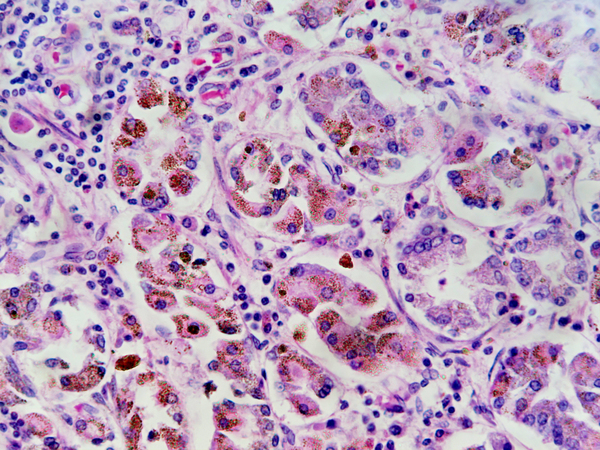