called giant axons. Axons are specialized extensions of nerve cells (neurons) that transmit nerve impulses. Symptoms of the disorder first become apparent in the peripheral nervous system, in which long axons connect the brain and spinal cord (central nervous system) to muscles and to sensory cells that detect sensations such as touch, pain, heat, and sound. However, axons in the central nervous system are affected as well.

The signs and symptoms of giant axonal neuropathy generally begin in early childhood and get worse over time. Most affected individuals first have problems with walking. Later they may lose sensation, strength, and reflexes in their limbs; experience difficulty coordinating movements (ataxia); and require wheelchair assistance. Many affected individuals have an abnormal curvature of the spine (scoliosis). Visual and hearing problems may also occur. Many individuals with this condition have extremely kinky hair as compared to others in their family.

Giant axonal neuropathy can also impact the autonomic nervous system, which controls involuntary body processes. Affected individuals may experience problems with constipation, heat intolerance, and the release of urine (neurogenic bladder), and a reduction in or loss of the ability to sweat.

As the disorder worsens, paralysis, seizures, difficulty breathing or swallowing, and a gradual decline in mental function (dementia) can also occur. Most people with giant axonal neuropathy do not survive past their twenties.

Some affected individuals have a milder form of giant axonal neuropathy that begins later in life. Movement problems in these individuals are less severe, and the signs and symptoms usually worsen at a slower rate than in the classic form of the condition. Individuals with the milder form often have straight hair, and they may survive into adulthood.

Giant axonal neuropathy is a very rare disorder; only about 50 affected families have been described in the medical literature. The condition is thought to be underdiagnosed because its early symptoms resemble those of other, more common disorders affecting the peripheral nervous system, such as Charcot-Marie-Tooth disease.

Giant axonal neuropathy is caused by mutations in the GAN gene, which provides instructions for making a protein called gigaxonin. Gigaxonin is part of the ubiquitin-proteasome system, which is a process that identifies and gets rid of excess or damaged proteins within cells. In particular, gigaxonin plays a role in the breakdown of neurofilaments, which comprise the structural framework that establishes the size and shape of axons.

Learn more about the gene associated with Giant axonal neuropathy 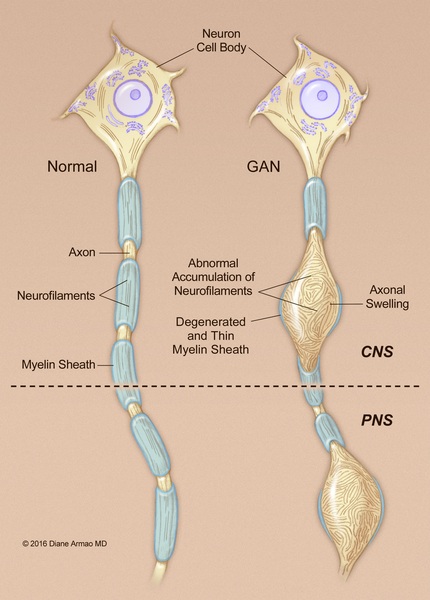