Cholangiocarcinoma is a group of cancers that begin in the bile ducts. Bile ducts are branched tubes that connect the liver

to the small intestine

. They carry bile, which is a fluid that helps the body digest fats that are in food. Bile is made in the liver and stored in the gallbladder before being released in the small intestine after a person eats.

Cholangiocarcinoma is classified by its location in relation to the liver. Intrahepatic

The three types of cholangiocarcinoma do not usually cause any symptoms in their early stages, and this cancer is usually not diagnosed until it has already spread beyond the bile ducts to other tissues. Symptoms often result when bile ducts become blocked by the tumor. The most common symptom is jaundice, in which the skin and whites of the eyes turn yellow. Other symptoms can include extreme tiredness (fatigue), itching, dark-colored urine, loss of appetite, unintentional weight loss, abdominal pain, and light-colored and greasy stools. These symptoms are described as "nonspecific" because they can be features of many different diseases.

Most people who develop cholangiocarcinoma are older than 65. Because this cancer is often not discovered until it has already spread, it can be challenging to treat effectively. Affected individuals can survive for several months to several years after diagnosis, depending on the location of the cancer and how advanced it is.

Cholangiocarcinoma affects 8,000 people each year in the United States. This type of cancer occurs much more frequently in Southeast Asian countries such as Thailand, where it is related to infection with a parasite that is common there. For unknown reasons, cholangiocarcinoma occurs slightly more often in men than in women.

, for example—allow cells to grow and divide uncontrollably

to form a tumor. In most cases of cholangiocarcinoma, these genetic changes are acquired during a person's lifetime and are present only in the bile duct cells that give rise to the tumor. The genetic changes, which are called somatic mutations, are not inherited. Somatic mutations in many different genes have been found in cholangiocarcinoma. Some of these genes act as tumor suppressors, which means they help keep the growth and division of cells tightly regulated. Mutations in or deletions of tumor suppressor genes can allow cells to grow and divide without control or order, which is a hallmark of cancer. Other genes associated with cholangiocarcinoma are oncogenes

; when they are turned on (activated) abnormally, these genes have the potential to cause normal cells to become cancerous. Identifying somatic mutations in cholangiocarcinoma may provide clues to how quickly the cancer will grow and spread, and which treatments might be most effective.

Researchers have also investigated inherited variations in several genes as possible risk factors for cholangiocarcinoma. These genetic changes, which are classified as germline mutations, are present in essentially all of the body's cells. However, no specific inherited changes have been found to be major risk factors for this disease.

Several non-genetic risk factors for cholangiocarcinoma have been identified. These include a bile duct disease called primary sclerosing cholangitis, bile duct stones or cysts, and exposure to certain chemical toxins used in manufacturing. In Southeast Asia, infection with parasitic worms that live in the human bile ducts greatly increase the risk of developing cholangiocarcinoma. Other risk factors that have been studied include long-term infection with viral hepatitis B or C, scarring of the liver (cirrhosis), and chronic diseases such as inflammatory bowel disease and diabetes. Researchers suspect that certain lifestyle factors, including smoking, alcohol use, and obesity, may also contribute to the risk of developing cholangiocarcinoma.

Studies suggest that a combination of genetic, environmental, and lifestyle factors influence whether a person will develop cholangiocarcinoma. However, most people who develop the disease do not have any of the identified risk factors.

Learn more about the genes associated with Cholangiocarcinoma 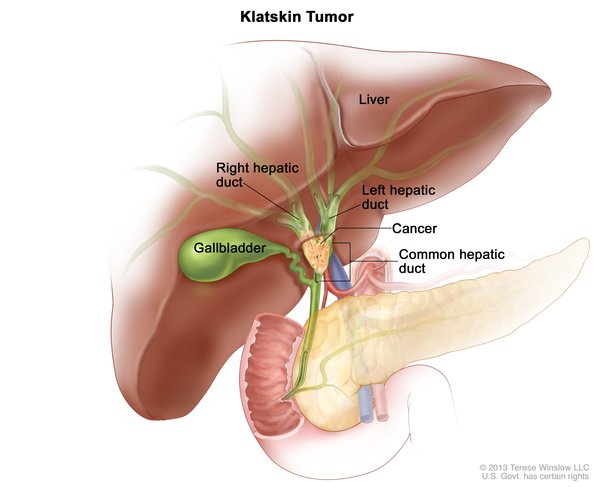