Carpenter syndrome is a condition characterized by the premature fusion of certain skull bones (craniosynostosis), abnormalities of the fingers and toes, and other developmental problems.

Craniosynostosis prevents the skull from growing normally, frequently giving the head a pointed appearance (acrocephaly). In severely affected individuals, the abnormal fusion of the skull bones results in a deformity called a cloverleaf skull

. Craniosynostosis can cause differences between the two sides of the head and face (craniofacial asymmetry). Early fusion of the skull bones can affect the development of the brain and lead to increased pressure within the skull (intracranial pressure). Premature fusion of the skull bones can cause several characteristic facial features in people with Carpenter syndrome. Distinctive facial features may include a flat nasal bridge

, outside corners of the eyes that point downward (down-slanting palpebral fissures

), or extra fingers or toes (polydactyly

). In Carpenter syndrome, cutaneous syndactyly is most common between the third (middle) and fourth (ring) fingers, and polydactyly frequently occurs next to the big or second toe or the fifth (pinky) finger.

Other features of Carpenter syndrome include obesity that begins in childhood, a soft out-pouching around the belly-button (umbilical hernia

), hearing loss, and heart defects. Additional skeletal abnormalities such as deformed hips, a rounded upper back that also curves to the side (kyphoscoliosis

), and knees that are angled inward (genu valgum

A few people with Carpenter syndrome have organs or tissues within their chest and abdomen that are in mirror-image reversed positions. This abnormal placement may affect several internal organs (situs inversus); just the heart (dextrocardia), placing the heart on the right side of the body instead of on the left; or only the major (great) arteries

of the heart, altering blood flow.

The signs and symptoms of this disorder vary considerably, even within the same family. The life expectancy for individuals with Carpenter syndrome is shortened but extremely variable.

The signs and symptoms of Carpenter syndrome are similar to another genetic condition called Greig cephalopolysyndactyly syndrome. The overlapping features, which include craniosynostosis, polydactyly, and heart abnormalities, can cause these two conditions to be misdiagnosed; genetic testing is often required for an accurate diagnosis.

Carpenter syndrome is thought to be a rare condition; approximately 70 cases have been described in the scientific literature.

Mutations in the RAB23 or MEGF8 gene cause Carpenter syndrome.

, which moves proteins and other molecules within cells in sac-like structures called vesicles. The Rab23 protein transports vesicles from the cell membrane to their proper location inside the cell. Vesicle trafficking is important for the transport of materials that are needed to trigger signaling during development. For example, the Rab23 protein regulates a developmental pathway called the hedgehog signaling pathway that is critical in cell growth (proliferation), cell specialization, and the normal shaping (patterning) of many parts of the body.

The MEGF8 gene provides instructions for making a protein whose function is unclear. Based on its structure, the Megf8 protein may be involved in cell processes such as sticking cells together (cell adhesion) and helping proteins interact with each other. Researchers also suspect that the Megf8 protein plays a role in normal body patterning.

Mutations in the RAB23 or MEGF8 gene lead to the production of proteins with little or no function. It is unclear how disruptions in protein function lead to the features of Carpenter syndrome, but it is likely that interference with normal body patterning plays a role. For reasons that are unknown, people with MEGF8 gene mutations are more likely to have dextrocardia and other organ positioning abnormalities and less severe craniosynostosis than individuals with RAB23 gene mutations.

Learn more about the genes associated with Carpenter syndrome 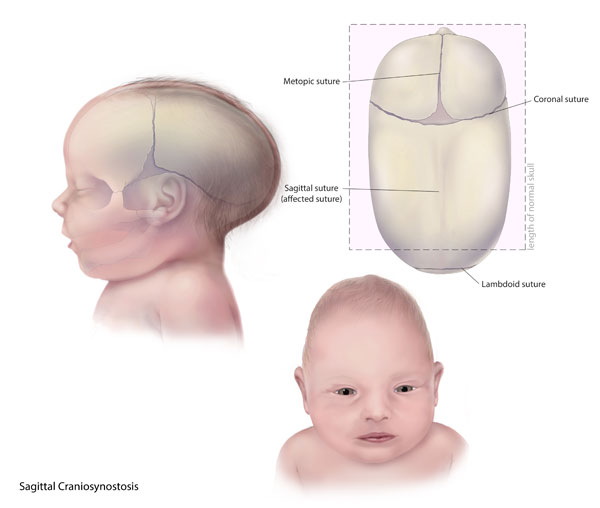