Bladder cancer is a disease in which certain cells in the bladder become abnormal and multiply uncontrollably to form a tumor. The bladder

is a muscular organ in the lower abdomen that stores urine until it can be removed (excreted) from the body.

Bladder cancer may cause blood in the urine, pain during urination, frequent urination, the feeling of needing to urinate without being able to, or lower back pain. Many of these signs and symptoms are nonspecific, which means they may occur in multiple disorders. People who have one or more of these nonspecific health problems often do not have bladder cancer, but have another condition such as an infection.

) beyond the lining of the bladder into nearby tissues or organs, it is known as invasive bladder cancer.

In the United States, bladder cancer is the fourth most common type of cancer in men. Bladder cancer occurs four times more often in men than in women, with about 60,000 men and 18,000 women diagnosed with the condition each year.

Cancers occur when genetic mutations build up in critical genes, specifically those that control cell growth and division (proliferation) or the repair of damaged DNA. These changes allow cells to grow and divide uncontrollably

Somatic mutations in the FGFR3, PIK3CA, KDM6A, and TP53 genes are common in bladder cancers. Each of these genes plays a critical role in regulating gene activity and cell growth, ensuring cells do not grow and divide too rapidly or uncontrollably. It is likely that mutations in these genes disrupt normal gene regulation, contributing to the uncontrolled cell growth that can lead to tumor formation in bladder cancer. Mutations in many other genes have been found to be associated with bladder cancer; each of these additional genes is associated with a small percentage of cases. Most of these genes are also involved in regulating the normal activity of genes and the growth of cells.

of part or all of chromosome 9 are commonly found in bladder cancer. Research shows that several genes that control cell growth and division are located on chromosome 9. It is likely that a loss of one or more of these genes plays a role in the early development and progression of bladder cancer.

Researchers have identified many lifestyle and environmental factors that expose individuals to cancer-causing compounds (carcinogens), which increase the rate at which somatic mutations occur, contributing to a person's risk of developing bladder cancer. The greatest risk factor is long-term tobacco smoking. It is estimated that half of people with bladder cancer have a history of tobacco smoking. Other environmental risk factors include chronic bladder inflammation, exposure to certain industrial chemicals, certain herbal medicines common in Asia, a parasitic infection called schistosomiasis, and long-term use of urinary catheters.

Learn more about the genes and chromosome associated with Bladder cancer

Bladder cancer is typically not inherited. It is usually associated with somatic mutations that occur in certain cells in the bladder during a person's lifetime.

In rare families, the risk of bladder cancer is inherited. In these cases, the cancer risk follows an autosomal dominant pattern

, which means one copy of the altered gene in each cell is sufficient to increase a person's chance of developing the disease. It is important to note that people inherit an increased risk of cancer, not the disease itself. Not all people who inherit mutations in these genes will develop bladder cancer. 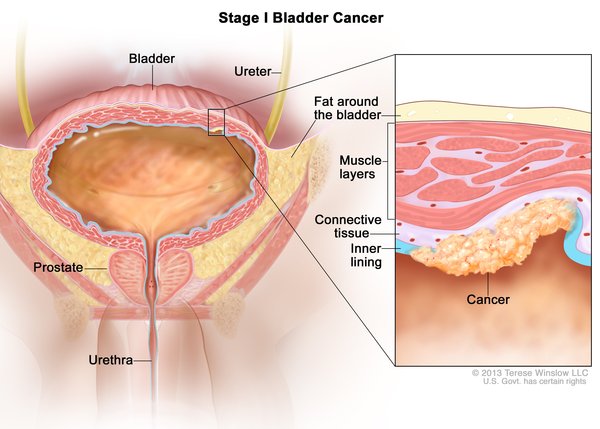