Autoimmune lymphoproliferative syndrome (ALPS) is an inherited disorder in which the body cannot properly regulate the number of immune system cells (lymphocytes). ALPS is characterized by the production of an abnormally large number of lymphocytes (lymphoproliferation). Accumulation of excess lymphocytes results in enlargement of the lymph nodes (lymphadenopathy), the liver (hepatomegaly), and the spleen (splenomegaly).

), white blood cells (autoimmune neutropenia), or platelets (autoimmune thrombocytopenia). Less commonly, autoimmune disorders that affect other organs and tissues occur in people with ALPS. These disorders can damage the kidneys

ALPS can have varying patterns of signs and symptoms. Most commonly, lymphoproliferation becomes apparent during childhood. Enlargement of the lymph nodes and spleen frequently occur in affected individuals. Autoimmune disorders typically develop several years later, most frequently as a combination of hemolytic anemia and thrombocytopenia, also called Evans syndrome. People with this classic form of ALPS generally have a near-normal lifespan, but have a greatly increased risk of developing cancer of the immune system cells (lymphoma

) compared with the general population.

Some people have signs and symptoms that resemble those of ALPS, including lymphoproliferation, lymphadenopathy, splenomegaly, and low blood counts, but the specific pattern of these signs and symptoms or the genetic cause may be different. Researchers disagree whether individuals with these non-classic forms should be considered to have ALPS or a separate condition.

ALPS is a rare disorder; its prevalence is unknown.

Mutations in the FAS gene cause ALPS in approximately 75 percent of affected individuals; these mutations are associated with the classic form of the disorder. The FAS gene provides instructions for making a protein involved in cell signaling that results in the self-destruction of cells (apoptosis

are produced. Normally, these lymphocytes undergo apoptosis when they are no longer required. FAS gene mutations lead to an abnormal protein that interferes with apoptosis. As a result, excess lymphocytes accumulate in the body's tissues and organs and often begin attacking them, leading to autoimmune disorders. Interference with apoptosis allows cells to multiply without control, leading to the lymphomas that often occur in people with this disorder.

Non-classic forms of ALPS may be caused by mutations in additional genes, some of which have not been identified.

Learn more about the genes associated with Autoimmune lymphoproliferative syndrome

In most people with ALPS, including the majority of those with FAS gene mutations, this condition is inherited in an autosomal dominant pattern, which means one copy of an altered gene in each cell is sufficient to cause the disorder. In these cases, an affected person usually inherits the mutation

from one affected parent. Other cases with an autosomal dominant pattern result from new (de novo) gene mutations

that occur early in embryonic development in people with no history of the disorder in their family.

In a small number of cases, including some cases caused by FAS gene mutations, ALPS is inherited in an autosomal recessive pattern

, which means both copies of a gene in each cell have mutations. The parents of an individual with an autosomal recessive condition each carry one copy of the mutated gene, but they typically do not show signs and symptoms of the condition.

ALPS can also arise from a mutation in lymphocytes that is not inherited but instead occurs during an individual's lifetime. This alteration is called a somatic mutation. 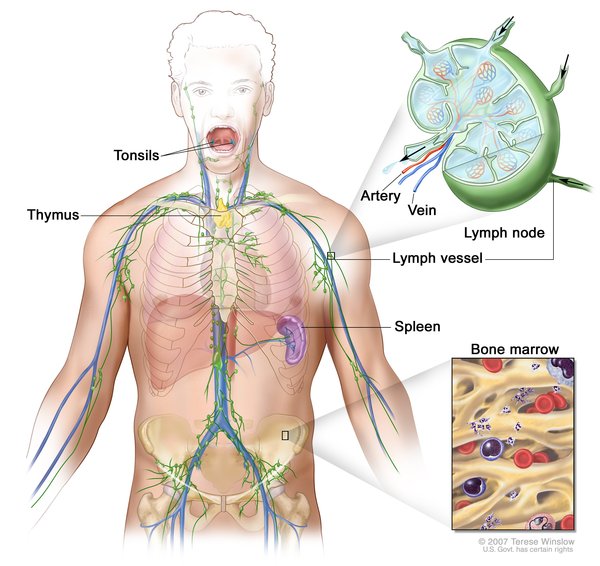