Alzheimer disease is a degenerative disease of the brain that causes dementia, which is a gradual loss of memory, judgment, and ability to function. This disorder usually appears in people older than age 65, but less common forms of the disease appear earlier in adulthood.

Memory loss is the most common sign of Alzheimer disease. Forgetfulness may be subtle at first, but the loss of memory worsens over time until it interferes with most aspects of daily living. Even in familiar settings, a person with Alzheimer disease may get lost or become confused. Routine tasks such as preparing meals, doing laundry, and performing other household chores can be challenging. Additionally, it may become difficult to recognize people and name objects. Affected people increasingly require help with dressing, eating, and personal care.

As the disorder progresses, some people with Alzheimer disease experience personality and behavioral changes and have trouble interacting in a socially appropriate manner. Other common symptoms include agitation, restlessness, withdrawal, and loss of language skills. People with this disease usually require total care during the advanced stages of the disease.

Affected individuals usually survive 8 to 10 years after the appearance of symptoms, but the course of the disease can range from 1 to 25 years. Survival is usually shorter in individuals diagnosed after age 80 than in those diagnosed at a younger age. Death usually results from pneumonia, malnutrition, or general body wasting (inanition).

Alzheimer disease currently affects more than 5 million Americans. Because the risk of developing Alzheimer disease increases with age and more people are living longer, the number of people with this disease is expected to increase significantly in coming decades.

Some cases of early-onset Alzheimer disease are caused by gene mutations that can be passed from parent to child. This results in what is known as early-onset familial Alzheimer disease (FAD). Researchers have found that this form of the disorder can result from mutations in the APP, PSEN1, or PSEN2 genes. When any of these genes is altered, large amounts of a toxic protein fragment called amyloid beta peptide are produced in the brain. This peptide can build up in the brain to form clumps called amyloid plaques

, which are characteristic of Alzheimer disease. A buildup of toxic amyloid beta peptide and amyloid plaques may lead to the death of nerve cells and the progressive signs and symptoms of this disorder. Other cases of early-onset Alzheimer disease may be associated with changes in different genes, some of which have not been identified.

Some evidence indicates that people with Down syndrome have an increased risk of developing Alzheimer disease. Down syndrome, a condition characterized by intellectual disability and other health problems, occurs when a person is born with an extra copy of chromosome 21

The causes of late-onset Alzheimer disease are less clear. The late-onset form does not clearly run in families, although clusters of cases have been reported in some families. This disorder is probably related to variations in one or more genes in combination with lifestyle and environmental factors. A gene called APOE has been studied extensively as a risk factor for the disease. In particular, a variant of this gene called the e4 allele seems to increase an individual's risk for developing late-onset Alzheimer disease.

Learn more about the genes associated with Alzheimer disease

, which means one copy of an altered gene in each cell is sufficient to cause the disorder. In most cases, an affected person inherits the altered gene from one affected parent. 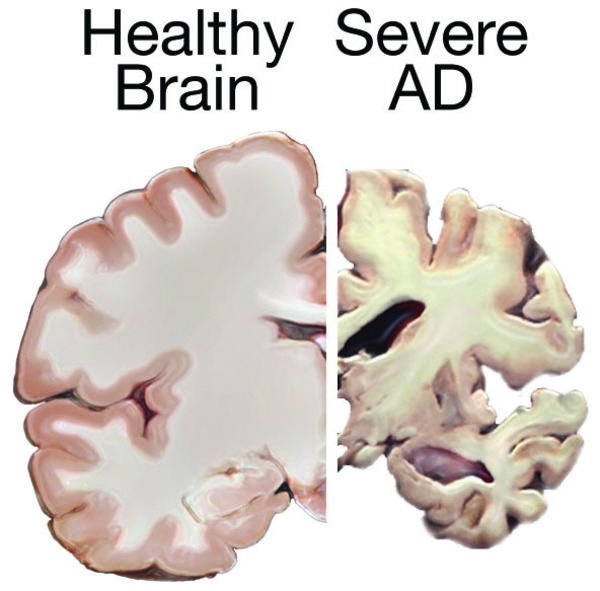