You Are Here:
Home →
Genetics →
Genetic Conditions →
Down syndrome
URL of this page: https://medlineplus.gov/genetics/condition/down-syndrome/

People with Down syndrome often have a characteristic facial appearance that includes a flattened appearance to the face, outside corners of the eyes that point upward (upslanting palpebral fissures

, and a tongue that tends to stick out of the mouth. Affected individuals may have a variety of birth defects. Many people with Down syndrome have small hands and feet and a single crease across the palms of the hands

. About half of all affected children are born with a heart defect. Digestive abnormalities, such as a blockage of the intestine, are less common.

Individuals with Down syndrome have an increased risk of developing several medical conditions. These include gastroesophageal reflux, which is a backflow of acidic stomach contents into the esophagus, and celiac disease, which is an intolerance of a wheat protein called gluten. About 15 percent of people with Down syndrome have an underactive thyroid gland (hypothyroidism). The thyroid gland

is a butterfly-shaped organ in the lower neck that produces hormones. Individuals with Down syndrome also have an increased risk of hearing and vision problems. Additionally, a small percentage of children with Down syndrome develop cancer of blood-forming cells (leukemia

Most cases of Down syndrome result from trisomy 21

, which means each cell in the body has three copies of chromosome 21 instead of the usual two copies.

A very small percentage of people with Down syndrome have an extra copy of chromosome 21 in only some of the body's cells. In these people, the condition is called mosaic

Researchers believe that having extra copies of genes on chromosome 21 disrupts the course of normal development, causing the characteristic features of Down syndrome and the increased risk of health problems associated with this condition.

Learn more about the chromosome associated with Down syndrome

Most cases of Down syndrome are not inherited. When the condition is caused by trisomy 21, the chromosomal abnormality occurs as a random event during the formation of reproductive cells in a parent. The abnormality usually occurs in egg cells, but it occasionally occurs in sperm cells. An error in cell division called nondisjunction results in a reproductive cell with an abnormal number of chromosomes. For example, an egg or sperm cell may gain an extra copy of chromosome 21. If one of these atypical reproductive cells contributes to the genetic makeup of a child, the child will have an extra chromosome 21

in each of the body's cells.

. No genetic material is gained or lost in a balanced translocation, so these chromosomal changes usually do not cause any health problems. However, as this translocation is passed to the next generation, it can become unbalanced

. People who inherit an unbalanced translocation involving chromosome 21 may have extra genetic material from chromosome 21, which causes Down syndrome.

Like trisomy 21, mosaic Down syndrome is not inherited. It occurs as a random event during cell division early in fetal development. As a result, some of the body's cells have the usual two copies of chromosome 21, and other cells have three copies of this chromosome. 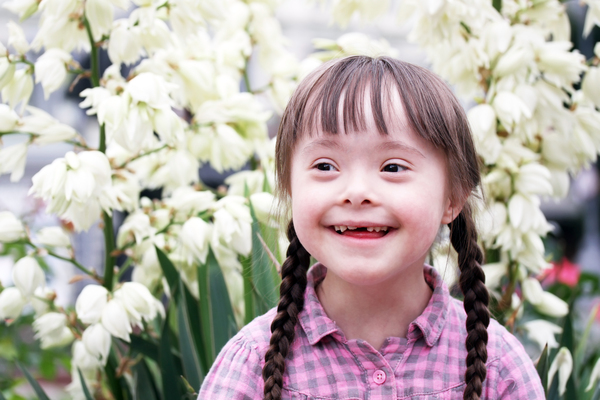