47,XYY syndrome is characterized by an extra copy of the Y chromosome in each of an individual's cells. Although many people with this condition are taller than average, the chromosomal change sometimes causes no unusual physical features. Most individuals with 47,XYY syndrome have normal production of the male sex hormone testosterone and normal male sexual development, and they are usually able to father children.

47,XYY syndrome is associated with an increased risk of learning disabilities and delayed development of speech and language skills. Affected children can have delayed development of motor skills (such as sitting and walking) or weak muscle tone (hypotonia). Other signs and symptoms of this condition include hand tremors or other involuntary movements (motor tics), seizures, and asthma. Individuals with 47,XYY syndrome have an increased risk of behavioral, social, and emotional difficulties compared with their unaffected peers. These problems include attention-deficit/hyperactivity disorder (ADHD); depression; anxiety; and autism spectrum disorder, which is a group of developmental conditions that affect communication and social interaction.

), and abnormal side-to-side curvature of the spine (scoliosis

). These characteristics vary widely among people with this condition.

This condition occurs in about 1 in 1,000 newborns. Five to 10 children with 47,XYY syndrome are born in the United States each day. Many affected individuals are never diagnosed or not diagnosed until later in life.

because they help determine whether a person will develop male or female sex characteristics. Females typically have two X chromosomes (46,XX), and males have one X chromosome and one Y chromosome (46,XY

47,XYY syndrome is caused by the presence of an extra copy of the Y chromosome

in each of a male's cells. As a result of the extra Y chromosome, each cell has a total of 47 chromosomes instead of the usual 46. It is unclear why an extra copy of the Y chromosome is associated with tall stature, learning problems, and other features in some boys and men.

Some people with 47,XYY syndrome have an extra Y chromosome in only some of their cells. This phenomenon is called 46,XY/47,XYY mosaicism

Learn more about the chromosome associated with 47,XYY syndrome

47,XYY syndrome is not inherited. The chromosomal change occurs as a random event during the formation of sperm cells. An error in cell division called nondisjunction can result in sperm cells with an extra copy of the Y chromosome

. If one of these atypical reproductive cells contributes to the genetic makeup of a child, the child will have an extra Y chromosome in each of the body's cells.

46,XY/47,XYY mosaicism is also not inherited. It occurs as a random event during cell division

in early embryonic development. As a result, some of an affected person's cells have one X chromosome and one Y chromosome (46,XY

), and other cells have one X chromosome and two Y chromosomes (47,XYY). 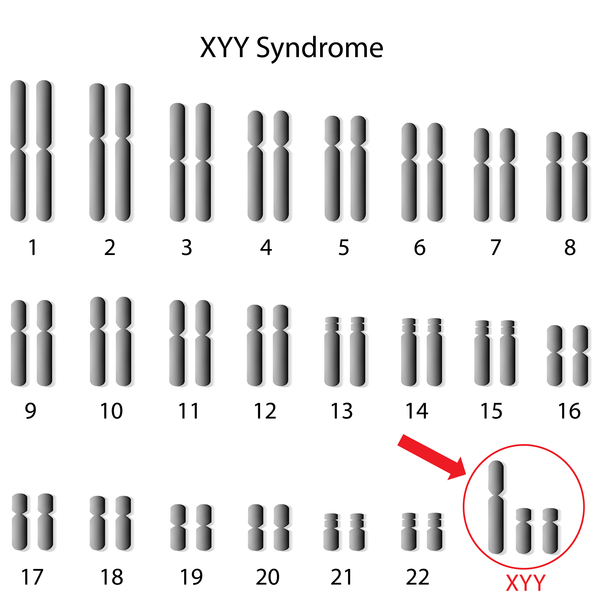